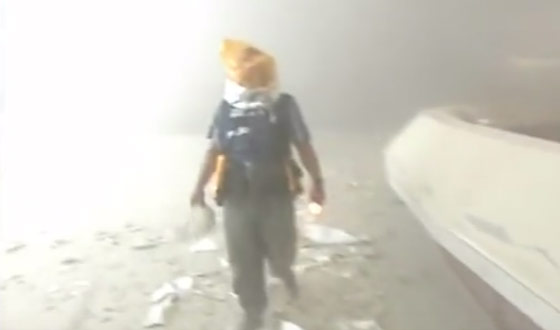 However, the picture becomes ultra-clear after a man by the name of William Bennette was filmed exiting WTC 7 after the attack in which he admitted that he was “Secret Service OST” which stands for Office of Secure Transportation.

According to Wikipedia, “The U.S. Department of Energy/National Nuclear Security Administration‘s Office of Secure Transportation (OST) provides safe and secure transportation of nuclear weapons and components and special nuclear materials, and conducts other missions supporting the national security of the United States of America.”

In the video, Bennette can be seen quickly removing a protective smoke hood, which some people online have referred to as a ‘radiation hood,’ from his head after being spotted by an on-scene reporter.

Moreover, the Secret Service employee also appears to have been equipped with what looks like a radiation detection devise of some sort and can be seen warning the reporter filming him to exit the building.

“I think you should leave. Everybody else is gone,” he said. “I’ll just make sure that there is nobody else coming down the stairs.”

Bennette can then be seen turning and heading back into the building after preventing the journalist from going any further.

What was an OST employee doing inside the World Trade Center after the two reported plane strikes?

As it turns out, Bennette had charges brought against him in 2005 and ended up serving 6-moths probation, a mere slap on the wrist, for the theft of several government vehicles which were slated for destruction after the attack.

Bennette is a retired New York Police Department Sargent who worked as a technician for the Secret Service OST.

Shepard Ambellas is an opinion journalist, analyst, and the founder and editor-in-chief of Intellihub News & Politics (Intellihub.com). Shepard is also known for producing Shade: The Motion Picture (2013) and appearing on Travel Channel’s America Declassified (2013). Shepard is a regular contributor to Infowars. Read more from Shep’s World. Follow Shep on Facebook and Twitter.