North American educators and law enforcement officials continue to take zero-tolerance gun policies to obscenely ridiculous levels. The latest hypersensitive over-reaction comes to us from Canada, where educators contacted local law enforcement after a 4 year old kindergartener drew a picture of her daddy shooting a gun at monsters and bad guys.

In the modern day Police State, everything is a crime, everyone is a suspect, and government myrmidons are all too willing to turn snitch at the first sign of ‘unusual behavior.’

Jessie Sansone and his family are reeling after he was arrested and strip searched by police after his four-year-old daughter drew a picture of a man with a gun in her Kitchener, Ont., kindergarten class.

The 26-year-old father of four said Saturday the sketch was supposed to be him, getting the bad guys and monsters.

The school must have thought differently, as after Nevaeh drew it Wednesday, the school contacted Family and Children’s Services and they called police.

Waterloo Police met Sansone at the school when he tried to pick up his kids he was told he was charged with possession of a firearm. He was then handcuffed and put him in one of the several squad cars waiting outside, he said.

While Sansone was being strip searched at the police station: told to disrobe, lift his testicles and bend over, his wife was home with their 15-month-old daughter.

“They came to my house, told my wife that I had been charged with possession of firearms, that she would have to come with them, and that Sundae (their infant daughter) would have to go with the social worker,” said Sansone. Stephanie called her Mom who rushed over to take Sundae instead.

The “gun” his children told police about? A toy pistol that shoots foam darts, which police discovered during a search of his house. 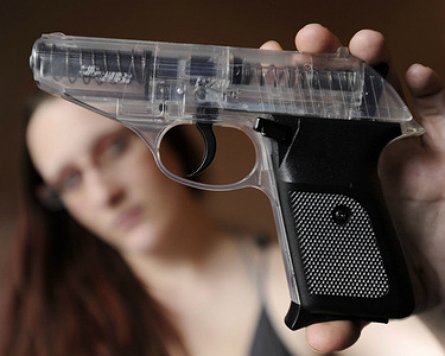 “The child had every belief it was real,” Thaler said. “The indication from the kids was that it was dad’s [gun].”

Sansone was finally released after four hours. He said he’s furious and that his name has been slandered.

While Canadians have firearms ownership policies that are significantly more stringent than those of their US counterparts, if you think the madness is restricted to those living north of the border, think again.

In 2007, Atlantic City 2nd grader Kyle Walker was suspended for violating his school’s zero tolerance policy when he drew the following stick figure with a gun: 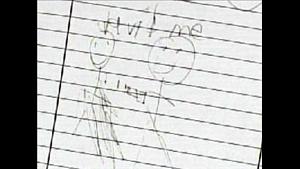 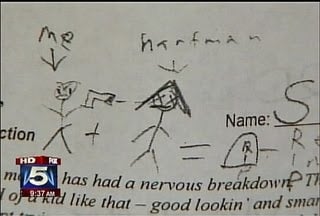 In December of 2010, ten students were punished with detention at Battlefield High School after their Christmas Sweater club distributed candy canes to other students. The reason given? Candy canes could be sharpened and ‘weaponized.’ [No word on whether school administrators and city officials would be detained and charged regarding the possibility of inciting violence as a result of the name of the school being “Battlefield”] 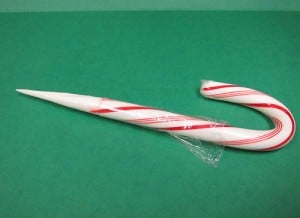 In a society where guns, violence, drugs, and sex appear on nearly every television station and at just about any hour of the day, we are at a loss for words at the sheer lunacy running rampant in our schools, law enforcement circles and government institutions.

Has the world lost its common sense?