Malls Erupt in Violence: “Chaotic Panic and Everybody Running All At Once” 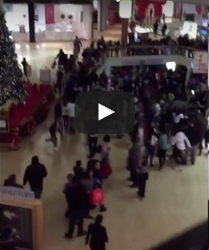 Editor’s Comment: Dissect this any way that you want. People are losing it, their sanity is coming unglued and there is an unspoken pressure that is eating away at the soul of America. If this is all it takes for things to break down, we’re in real trouble. Is this the scene of shoppers everywhere so desperate for a sale that their lives depend upon it? Is this economic pressure driving people to criminal behavior?

It seems clear enough that if any major disaster were to take hold in a major city anywhere in this country, it would bring out the absolute worst in a sector of society that has already been tested and brought to its limit. Emergency shortages will trigger panic and riots in sequence, as these people have almost been trained and conditioned to react that way. For every prepper out there, there are perhaps hundreds who have no threshold for disruption, hunger or want.

File this under ‘society is breaking down’…

Two days ago, we reported that heading into Christmas, countless “mall brawls” had broken out across America’s as last minute holiday shoppers were filmed fighting with each other in shopping malls in New Jersey, Alabama, Georgia and other states for those last minute “holiday cheer” purchases. The videos made for for a very Unmerry Christmas.

Now, in the spirit of holiday symmetry, following the one day lull on Christmas Day, the brawls returned on the day after Christmas, with fights, disturbances and false reports of gunfire causing chaotic scenes and shutting down several malls across the United States on Monday, as shoppers scrambled for the best deals in the typically busy post-Christmas shopping day.

The first calls from the The Mills at Jersey Gardens came in just after nightfall Monday. Witnesses said they thought they had heard shots fired. That, along with a fight, led to what Elizabeth police Officer Greg Jones described as a “chaotic panic and everybody running all at once.”  Eight to 10 people suffered minor injuries during a melee in the food court at the Jersey Gardens malls the mayor there said on Twitter.

Panic followed when someone shouted “gun,” after a chair hit the ground, causing a loud noise in the mall’s food court, Elizabeth Mayor Chris Bollwage tweeted.

The incident led to a SWAT team with riot shields and body armor raiding the mall, while shoppers either ran or hid in stores. No weapons were found and no-one was arrested.

Photos and video clips posted on social media showed heavily armed police officers responding to the incident as shoppers raced to exits and alarms rang out inside the mall.

Similar disturbances unfolded across the United States on Monday at malls that were packed with shoppers returning gifts, using gift cards they received over the holiday weekend or simply searching for clearance deals. Many involved calls of shots being fired and youths fighting. It was unclear if the incidents were connected.

As Reuters reports, a large fight between teenagers broke out in the food court at the Cross Creek Mall in Fayetteville, North Carolina. Police fielded several unconfirmed reports of shots fired, said a Facebook post by the Fayetteville Police Department, which also said the mall was evacuated.

The Cross Creek Mall in Fayetteville, North Carolina, was evacuated as police arrived to break up the fight. Claims were made that shots were fired.

“Once people start running in that area or chairs are getting knocked over, tables, that sort of thing, that echoes and it could resemble the sound of a gunshot to a lot of people,” he said.

The Hulen Mall in Fort Worth, Texas, was on lockdown, Fort Worth police said on Twitter. The CBS website there reported that police said officers responded to reports of gunshots but arrived to find that several fights had broken out involving 100-150 people. There were no injuries, police said.  Fort Worth Police spokeswoman Tamara Velle said officers initially responded to reported gunfire inside the mall. After breaking up the fights, officers stopped by each store to let people leave while the lockdown remained in effect, KTVT reported.

hulen mall wild for this one lmao pic.twitter.com/4rD4ZO5h1H

At least one fight shut down the Fox Valley Mall in Aurora, Illinois, late on Monday, and police were called to quell the disturbance, the Chicago Daily Herald reported, citing managers of businesses in the building.

Online videos showed uniformed personnel directing mall patrons out of the building and customers fleeing down an escalator. Police and mall management could not be reached for comment.

Hundreds of people (left) were in the vicinity of a food court brawl (right) in the
Fox Valley Mall in Aurora, Illinois. Seven juveniles were arrested in the fight

In Memphis, Tennessee, seven people were arrested after incidents at two malls, CNN affiliate WMCA reported. Police said a group started a disturbance in the Wolfchase Galleria food court and started running, which prompted some customers to call 911, according to Fox 13.

Cops at Wolfchase Mall in Memphis removed both adults and juveniles.

An officer leaves Oak Court Mall in Memphis, Tennesse where police were called
after a fight broke out and reports were made of shots being fired.

Then a crowd gathered outside Oak Court Mall, about 10 miles west, and
started a disturbance, WMCA said. Both malls were cleared and closed
early for the night.

The Town Center Aurora in Aurora, Colorado, was also closed early after multiple skirmishes were reported inside the mall, the Aurora Police Department said on Twitter.

Teens were tackled by cops at the Aurora Mall in Colorado. There were several
large fights ‘involving juveniles’, cops said

Aurora PD spokesman Sgt. Chris Amsler said about 100 people had gathered in the food court before the brawls broke out — prompting the Colorado mall to close early on Monday afternoon. “(It) kind of morphed into this large disturbance,” Amsler said.

When off-duty police officers working as security guards tried to break up a fight, people circled the officers, who called for backup, Amsler said. As police officers on duty arrived, fights broke out throughout the mall, at a movie theater and at a nearby park-and-ride lot, he said. He estimated 500 people were involved. Authorities arrested five people, all juveniles, and recovered no weapons, he said. One person assaulted at the park-and-ride lot suffered “significant” injuries and was taken to a hospital, Amsler said.

The mall is closing early this evening due to a disturbance. No immediate threats exist. We will open tomorrow at 10 a.m.

In Monroeville, Pennsylvania, seven people were arrested after incidents at two malls, CNN affiliate WMCA reported. Police said a group started a disturbance in the Wolfchase Galleria food court and started running, which prompted some customers to call 911, WMCA said. Then a crowd gathered outside Oak Court Mall, about 10 miles west, and started a disturbance, WMCA said. Both malls were cleared and closed early for the night.

Shots were reported in both incidents, but police said they found no evidence of gunfire, WMCA said. No injuries were reported, CNN affiliate WATN said.

Police put the Arizona Mills mall in Tempe, Arizona, on lockdown after reports of shots fired inside the shopping center. Two people, including a juvenile, were arrested after two fights broke out at the mall, an ABC affiliate reported.

In Beechwood, Ohio, a juvenile was arrested for hitting a police officer after police used pepper spray to break up a fight that started about 6:30pm near a food court. Crowds were seen falling over themselves in a stampede towards the exits at the Beechwood Place mall, which went into lockdown as police investigated. Officers initially responded to the scene for a report of shots fired. Police later confirmed that there were no gunshots.

Shoppers rush into a wild stampede at the Beechwood Place Mall after a fight broke
out and someone shouted – incorrectly, police said – that a gun had been drawn

Fire officials say a man and a police officer were exposed to the pepper spray and received medical treatment. No one else was injured. John Boyd, the 19-year-old who was hit with pepper spray, described the sensation to Cleveland.com.  ‘My face burned… it went into my skin,’ Boyd said. ‘My whole body burned.’ It wasn’t clear what caused the fight, but police told USA Today that the incident had apparently been ‘loosely organized on social media’.

Finally, a fight at The Shoppes at Buckland Hills mall in Manchester, Connecticut, led to the mall being evacuated around 5:30pm, according to police. Video shows boys throwing swift jabs at one another while other youths crowd around to watch.

‘Up to ten’ teenagers were involved in the fights, according to police. One police officer was assaulted while trying to break up one of the first fights, authorities said, but didn’t seek medical attention.

Crowds peered through glass as boys threw punches at one another in The Shoppes
at Buckland Hills mall in Manchester, CT. Several boys were arrested

There were several hundred teens in the mall when the fights broke out, and several were arrested, Manchester police Captain Chris Davis said on Twitter. There were no weapons involved and no sign that the fight was gang related, police said.  It’s not known whether the rash of incidents across the country were coordinated in any way, or were just coincidental.