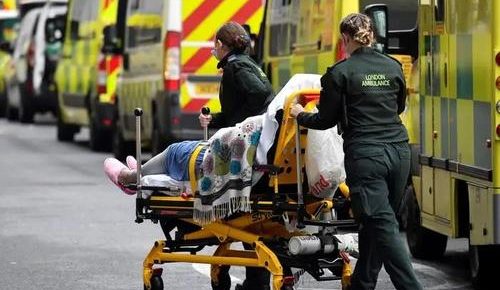 Over half of those hospitalized with Covid-19 in the UK only tested positive after admission – suggesting that “vast numbers are being classed as hospitalized by Covid when they were admitted with other ailments, with the virus picked up by routine testing,” according to The Telegraph, citing leaked government figures.

The leaked data – covering all NHS trusts in England – show that, as of last Thursday, just 44 percent of patients classed as being hospitalised with Covid had tested positive by the time they were admitted.

The majority of cases were not detected until patients underwent standard Covid tests, carried out on everyone admitted to the hospital for any reason.

Overall, 56 per cent of Covid hospitalisations fell into this category, the data, seen by The Telegraph, show.

Crucially, this group does not distinguish between those admitted because of severe illness, later found to be caused by the virus, and those in hospital for different reasons who might otherwise never have known that they had picked it up. -Telegraph

In June, UK health officials instructed NHS trusts to provide “a breakdown of the current stock of Covid patients” between those who were hospitalized primarily for Covid and those admitted for other reasons. Thus far, the NHS has failed to publish this now-leaked information.

“Experts said the high number of cases being detected belatedly – at a time when PCR tests were widely available – suggested many such patients had been admitted for other reasons,” according to the report.

“This data is incredibly important, and it should be published on an ongoing basis,” said Prof Carl Heneghan, director of the Center for Evidence-Based Medicine at the University of Oxford. “When people hear about hospitalizations with Covid, they will assume that Covid is the likely cause, but this data shows something quite different – this is about Covid being detected after tests were looking for it.”

Heneghan has urged UK officials to be more transparent with this data – including whether or not the virus was the primary cause of hospital admission.

“This needs to be fixed as a matter of urgency,” he said, adding that the currently published data could lead the public “towards false conclusions,” which exaggerate the true level of pressure on the UK medical system.

“Nearly 18 months into the Covid crisis, it is absurd that data breaking down hospital admissions still isn’t publicly available on a regular basis,” said Sir Graham Brady, the chairman of the 1922 committee of Tory MPs. “Counting all patients who test positive as Covid hospitalizations is inevitably misleading and gives a false picture of the continuing health impact of the virus.”

Greg Clark, the chairman of Commons science and technology select committee, on Monday night said he would write to Sajid Javid, the Health Secretary, asking him to publish the breakdown on a regular basis following The Telegraph’s disclosure.

“If hospitalisations from Covid are a key determinant of how concerned we should be, and how quickly restrictions should be lifted, it’s important that the data is not presented in a way that could lead to the wrong conclusions being drawn,” he said.

“While some of these people may be being admitted due to Covid, we currently do not know how many. And for those who are not, there is a big distinction between people who are admitted because of Covid and those are in for something else but have Covid in such a mild form that it was not the cause of their hospitalisation.”

“It creates an impression that all these people are going into hospital with Covid, and that simply is not the case. People are worried and scared and not really understanding the true picture – that is what I find despicable,” one NHS data expert told the Telegraph.

Wonder how many US Covid hospitalizations were only diagnosed post-admission, keeping in mind of course that US hospitals are paid more for Covid patients under the CARES Act.