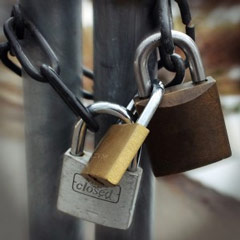 If the U.S. economy really is improving, then why are big U.S. retailers permanently shutting down thousands of stores?  The “retail apocalypse” that I have written about so frequently appears to be accelerating.  As you will see below, major U.S. retailers have announced that they are closing more than 6,000 locations, but economic conditions in this country are still fairly stable.  So if this is happening already, what are things going to look like once the next recession strikes?  For a long time, I have been pointing to 2015 as a major “turning point” for the U.S. economy, and I still feel that way.  And since I started The Economic Collapse Blog at the end of 2009, I have never seen as many indications that we are headed into another major economic downturn as I do right now.  If retailers are closing this many stores already, what are our malls and shopping centers going to look like a few years from now?

The list below comes from information compiled by About.com, but I have only included major retailers that have announced plans to close at least 10 stores.  Most of these closures will take place this year, but in some instances the closures are scheduled to be phased in over a number of years.  As you can see, the number of stores that are being permanently shut down is absolutely staggering…

Without a doubt, Internet retailing is taking a huge toll on brick and mortar stores, and this is a trend that is not going to end any time soon.

But as Thad Beversdorf has pointed out, we have also seen a stunning decline in true discretionary consumer spending over the past six months…

What we find is that over the past 6 months we had a tremendous drop in true discretionary consumer spending. Within the overall downtrend we do see a bit of a rally in February but quite ominously that rally failed and the bottom absolutely fell out. Again the importance is it confirms the fundamental theory that consumer spending is showing the initial signs of a severe pull back. A worrying signal to be certain as we would expect this pull back to begin impacting other areas of consumer spending. The reason is that American consumers typically do not voluntarily pull back like that on spending but do so because they have run out of credit. And if credit is running thin it will surely be felt in all spending.

The truth is that middle class U.S. consumers are tapped out.  Most families are just scraping by financially from month to month.  For most Americans, there simply is not a whole lot of extra money left over to go shopping with these days.

In fact, at this point approximately one out of every four Americans spend at least half of their incomes just on rent…

More than one in four Americans are spending at least half of their family income on rent – leaving little money left to purchase groceries, buy clothing or put gas in the car, new figures have revealed.

A staggering 11.25 million households consume 50 percent or more of their income on housing and utilities, according to an analysis of Census data by nonprofit firm, Enterprise Community Partners.

And 1.8 million of these households spend at least 70 percent of their paychecks on rent.

The surging cost of rental housing has affected a rising number of families since the Great Recession hit in 2007. Officials define housing costs in excess of 30 percent of income as burdensome.

For decades, the U.S. economy was powered by a free spending middle class that had plenty of discretionary income to throw around.  But now that the middle class is being systematically destroyed, that paradigm is changing.  Americans families simply do not have the same resources that they once did, and that spells big trouble for retailers.

As you read this article, the United States still has more retail space per person than any other nation on the planet.  But as stores close by the thousands, “space available” signs are going to be popping up everywhere.  This is especially going to be true in poor and lower middle class neighborhoods.  Especially after what we just witnessed in Baltimore, many retailers are not going to hesitate to shut down underperforming locations in impoverished areas.

And remember, the next major economic crisis has not even arrived yet.  Once it does, the business environment in this country is going to change dramatically, and a few years from now America is going to look far different than it does right now.