Lib Media Prepares For War: “A Violent Response To Trump Is As Logical As Any” 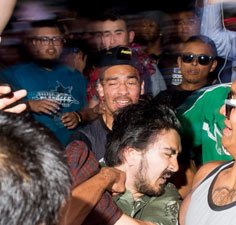 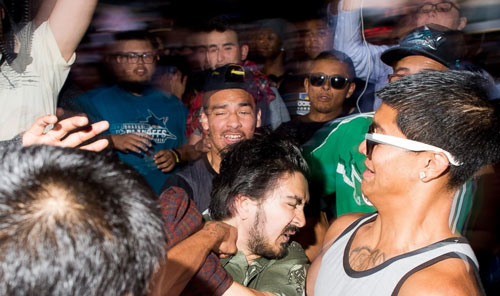 (Violent thugs gang up and attack a Trump supporter in San Jose, CA as others cheer them on)

You may have noticed that anytime there is a violent clash the mainstream media and Obama administration soundboards immediately place the blame on conservatives, libertarians, or anyone not affiliated with the progressive movement. You may also have noticed that it is often that case that the very people who point fingers at everyone else for inciting violent rioting are the ones who started the conflict to begin with. In San Jose last week protesters took to the streets, becoming rioters and violent attackers shortly thereafter. The response from the mainstream media and local government? Blame peaceful trump protesters.

At this point, as Special Forces insider Tim Kennedy warned recently, those attending Trump rallies across America should prepare to be battered and assaulted as there exists a real possibility for violent civil unrest. So much so, in fact, that as The Market Ticker points out, major liberal mouthpieces like the Huffington Post are outright suggesting that this may be the only way to stop a Trump “normalization.”

Trump has not just flagrantly violated the typical boundaries of political discourse, his candidacy is linked to multiple instances of violence. It shouldn’t be a surprise that opposition to him has responded in kind.

Yet, a lot of people seem shocked and appalled at this perfectly logical reaction. In the face of media, politicians, and GOP primary voters normalizing Trump as a presidential candidate—whatever your personal beliefs regarding violent resistance—there’s an inherent value in forestalling Trump’s normalization. Violent resistance accomplishes this. In spite of this, such resistance is apparently more offensive and unacceptable to societal norms and liberal sensibilities than the nastiness being resisted in the first place.

I could go on point-by-point but there is no need, because the salient point of the Huffington Post’s article doesn’t lie there.  No, it lies in the validation of something that few are willing to say: Revolution is what formed this nation and the people have always, through history, had the right to engage in it whether the ruling class liked it or not (they don’t — duh.)

However, the Huffington Post might want to consider whether giving voice to such a buttclown as this guy is wise.  There are several reasons that no matter how stupid things have gotten in the years I’ve been writing The Market Ticker you have never seen the endorsement or advocacy of violence and you never will.

1. A violent mob is by definition out of control.  You can light the fuse but once it goes inside the box you have no idea how much explosive is in there, how much fuse remains between the outside of the box and the explosives (in other words, how much time you have to run — or whether you can even outrun what’s in the box at all), or what else is in there with the explosives.  In other words once you walk down this path by definition you irrevocably cede control over the outcome.

2. History says that in virtually every case what comes out the other side of such an event is worse than what you had before.  There’s a simple way to express this that I’ve used before when asked this question during a Q&A after a speech: For every George Washington, historically, you get 10 Hitlers.  Those odds suck and nobody in their right mind openly promotes a path of action that has a decent probability of ending up there unless there is no other choice.  Today, there certainly are other choices.

3. If violence is acceptable in the political process then it is legitimate for everyone, not just you.  By refusing to condemn such actions and instead claiming they have legitimacy, especially when such is done on the pages of a media publication in this nation, you are putting forward the premise that both you and your opposition have the same right to resort to these tactics.  To the extent you decide to assault someone, destroy or damage their property you have lost any claim to peace if and when they respond in-kind and since your act was the initiation of violence they have no duty to constrain their response.

Are you willing to be responsible for a rapidly-escalating cycle of violence ending in murder or even violent revolution which you cannot control and might well end in a fascist, totalitarian nation?

If not then an author has no business advocating through his or her writing, and The Huffington Post has no business printing, an article such as what was in fact just published.

Full analysis at The Market Ticker

While there have certainly been instances at Trump rallies and events where conservatives have aggressively responded in the face of heated arguments or threats, the fact of the matter is that Trump supporters have overwhelmingly shied away from widespread civil unrest, violence, rioting or gang beatings.

The liberal media may think that advocating violent resistance will work in their favor, but let’s keep in mind that for every action there will be a reaction.

If there’s one thing we know about those who support Donald Trump, it’s that they are heavily armed supporters of the Second Amendment, free speech and property rights (which also includes the personal safety of one’s body). And thus far, they have quite reserved considering just how spirited we know them to be.

We suspect that as things get heated this summer and more violent antics are instigated by liberal-leaning organizations, Trump supporters will begin to respond in kind.

As Denninger notes, “you can light the fuse but once it goes inside the box you have no idea how much explosive is in there.” The very fact that Donald Trump is a 50/50 shot for the Presidency of the United States should be a big blaring warning siren to those who think they can violently attack his supporters, the majority of whom are simply exercising their right to stand in a public venue.

There is, indeed, a lot of explosive in the box and The Huffington Post et. al. should consider what they may be setting in motion.

Prepare for Civil Unrest and Other Emergency Disaster Scenarios