Look At This Chart: 91.8 Million…That’s How Many People Are Not Working In America

This morning the Bureau of Labor and Statistics issued their latest non-farms payroll report.

The bad news is that this statistic is predicated on illusory machinations in how the government calculates the numbers.

First, we’ll note that job creation itself collapsed to a three year low. Economists expected 197,000 jobs to be created, but the end result was only 74,000. Of course, they have a reason for why that happened:

As a reason for the plunge the BLS says there was a major weather effect seen on the forced part-time series, and notes the decline in healthcare which is rare and part of the sector slowing. Thank you Obamacare.

It’s the weather. Duh. Had it not been cold and snowing in winter time we’d have created way more jobs!

Second, here is the single reason for how it’s possible that no jobs are being created but the official unemployment rate continues to decline.

Curious why despite the huge miss in payrolls the unemployment rate tumbled from 7.0% to 6.7%?

The reason is because in December the civilian labor force did what it usually does in the New Normal: it dropped from 155.3 million to 154.9 million, which means the labor participation rate just dropped to a fresh 35 year low, hitting levels not seen since 1978, at 62.8% down from 63.0%. 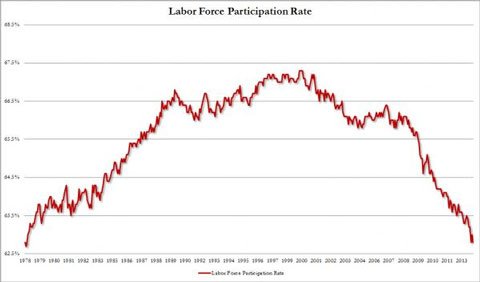 Because more Americans are being dropped from the labor force or simply no longer counted (like when millions lose their unemployment benefits this year), there are fewer people in the available work force. Thus, even if not a single job is created, when several hundred thousand people are no longer counted as being unemployed the official unemployment rate actually drops.

It’s what Al Gore might refer to as “fuzzy math.”

The following chart pretty much says it all and highlights exactly how bad things really are.

And the piece de resistance: Americans not in the labor force exploded higher by 535,000 to a new all time high 91.8 million. 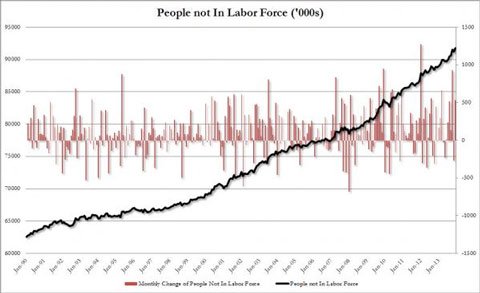 You can go on believing that unemployment is falling and that the policies implemented by the Obama administration and Congress have not had a negative impact on job growth.

Or, you can accept the fact that the establishment is attempting to pull the wool over our eyes in an effort to convince us that everything is moving along swimmingly.

The facts, however, are quite clear: Over 91.8 million working age Americans do not have jobs.

That’s a  massive number considering our population is a little over 300 million.

How, exactly, are Americans supposed to increase consumer spending, buy houses, and exit transitional living funds (a.k.a. welfare) when nearly one third of our population is out of work and no jobs are being created?

As Zero Hedge notes, “the jobless, laborless recovery continues to steam on.”

What’s scary is that this is going to get worse… much worse.