Locked and Loaded: Guess Which Industry Is Thriving While Everyone Else Teeters on the Edge of Failure

As consumer retail giants like Best Buy, which saw a 90% decline in net income in the second quarter of 2012, struggle for survival amid the worst economic crisis to hit the globe since the Great Depression of the 1930’s, there’s one industry that’s not only maintained its growth, but is showing record profits month after month.

This is no doubt a terrifying trend for those who’d prefer to “hug it out” with mass shooters or violent criminals in modern day domestic  war zones like Chicago, Illinois. For the rest of us, however, it’s a no brainer considering the rising tide of crime, the potential for an economic collapse that drives society to chaos, and a political climate that would like nothing more than to see Americans be forced into defending themselves with sticks and stones.

A large number of Americans see what’s coming, and they’re taking their personal safety and protection into their own hands, as evidenced by the following chart showing gun manufacturer Smith and Wesson’s quarterly revenue growth: 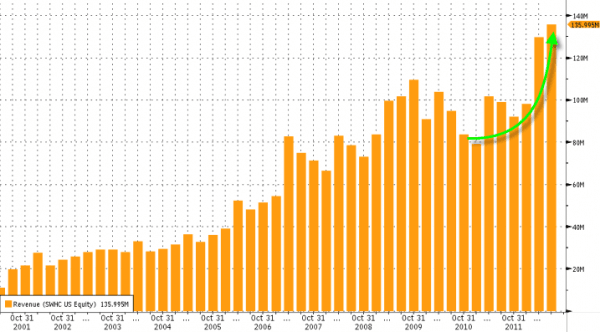 When the final bubble does pop (and here we make the wild assumption that no intelligent extraterrestrial life will be found to bail out the central banks in time), at least everyone will be locked and loaded. (Via Zero Hedge)

Year over year Smith and Wesson has seen growth of 48% (a number that must have left Solyndra executives and the Obama administration bewildered), and they are showing no signs of a slow-down. Likewise, other gun manufacturers are seeing record growth – and backlogs – as Ruger recently had to suspend new firearms orders citing “overwhelming demand.”

As was previously noted, over 10 million guns were sold in the United States in 2011, and 2012 is is going to be even bigger – something that should scare the crap out of anyone who’d ever think to invade or enslave the free people of the United States.

Violent criminals out there should take note – law abiding Americans aren’t going to sit back and take this lying down anymore.