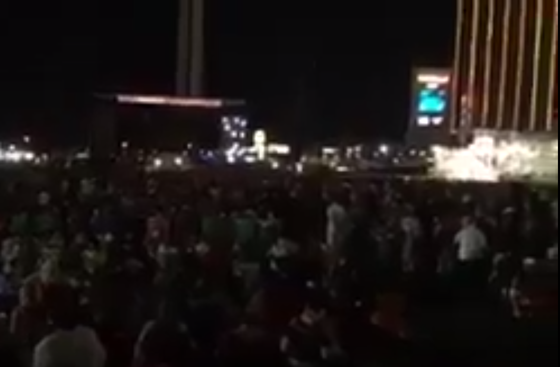 Update 9: After initial reports that multiple shooters may have been involved, Las Vegas police report that one suspect is down and no additional shooters are being sought.

Confirming that one suspect is down. This is an active investigation. Again, please do not head down to the Strip at this time.

At this time we do not believe there are any more shooters. More information to come shortly from @Sheriff_LVMPD.

Witnesses say shooter did not appear to be at the music festival; gunfire was coming from a higher altitude, possibly a hotel room https://t.co/8va4jJpwF9

UPDATE 7: Police confirm: “At this time we do have a suspect down.”

“We do have a suspect down” police confirm during latest update on #LasVegas shooting, where there are “numerous victims” pic.twitter.com/79iP8uMVbf

This is important for news and bystanders in Las Vegas. Help police do their job safely and effectively #MandalayBay #LasVegas pic.twitter.com/2iCPfTiwfG

Pray for our police officers putting their lives on the line in #LasVegas tonight. pic.twitter.com/b8CMNHxHNR

UPDATE 5: Live news stream via Right Side Broadcasting Network reporting as many as 70 victims currently being treated at local area hospitals

Well, this day was bound to come. https://t.co/lA7O5gS9QR

UPDATE 3: Reports that at least one suspect dead in Las Vegas Mass Shooting:

LISTEN TO THIS! I’m so scared for everyone on the #LasVegas Strip… ⬇️ pic.twitter.com/5tH9NQCK3o

*Though unconfirmed by officials as of yet, there have be reports of gunfire at Mandalay Bay, Tropicana, New York New York and possibly other venues. This is UNCONFIRMED.

Police are investigating a shooting at the Mandalay Bay casino in Las Vegas.

Details are still emerging but video streams of the incident have already begun appearing online.