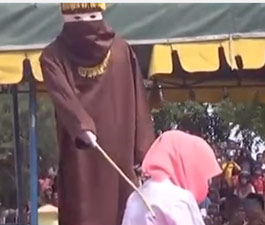 If there’s one thing we’ve learned about countries that have allowed large immigrant populations from Islamic nations to enter their borders, it’s that once these “political refugees” and asylum seekers get a foothold, they actively work to instill the laws of Sharia rather than assimilating to the system of laws in their respective newfound homes. We’ve seen these non-governmental Islamic courts pop up in France and Britain, and their is even a push in some American towns to implement Sharia-style councils in Muslim immigrant communities.

When President Trump restricted entry to the United States from several predominantly Muslim countries in the middle east, tens of thousands of vagina-hat wearing women protested his “racism” and “xenophobia.” That’s all well and good, and despite their ignorance, these women have every right to stand in the middle of the street and protest.

But had they done so in one of the very countries Trump blocked, they’d most certainly pay a severe price, especially if they’d worn a vagina hat on their head because it would violate the most basic decency laws of any Islamic theocracy or monarchy.

In Indonesia, for example, if a woman has sex with a man outside of wedlock, something a majority of women in modern day America engage in on a regular basis, they’d end up like the woman in the video below. As the public beating shows, it’s a family affair, where crowds bring their kids for an afternoon of fun, laughter, and brutal lashings…

The woman along with the man she was accused of having sex with, faced the brutal punishment as having sex outside of wedlock is against strict Sharia law.

Pictures show how the woman was forced to kneel on the ground on the public stage in front of a mosque in Indonesia’s Aceh province.

Such punishments are quite common in some Muslim countries – often handed down for very minor reasons. In some places women can be lashed for being in public without a male guardian.

But protests against these countries are rare and when they do take place, there are far fewer demonstrators than the millions who marched against Donald Trump last month. (Daily Mail)

Keep in mind that Sharia law is a religious dictate so it is quite normal in Islamic countries to brutally beat a woman for having sex, or even for being raped, because in such states rape is often blamed on the woman.

But it goes even further than that. If you are a woman in Pakistan, for example, and refuse to have sex with your husband, an Islamic council has ruled that you should be “lightly” beaten until you mend your ways:

The head of a powerful Islamic council is refusing to back down from a proposal that make it legal for husbands to “lightly beat” their wives in Pakistan, despite ridicule and revulsion including calls that maybe the  clerics should stand for their own gentle smack down.

Speaking to reporters, the chairman of the Council of Islamic Ideology, Muhammad Kahn Sherani, said a “light beating” should be a last resort.

“If you want her to mend her ways, you should first advise her. … If she refuses, stop talking to her … stop sharing a bed with her, and if things do not change, get a bit strict,” Sherani said, according to Pakistan’s Express-Tribune newspaper.

If all else fails, he added, “hit her with light things like handkerchief, a hat or a turban, but do not hit her on the face or private parts.”

How such archaic principles can mesh with the laws of first-world republics and democracies is a mystery to us, especially with the anti-rape feminist cultures that are budding on college campuses nationwide.

Here’s an almost unbelievable video by Mark Dice in which you’ll see a number of American women support the implementation of Sharia law:

If you were to say something like “grab them by the pussy” you’d be a sexist sexual abuser.

Rape a woman in an Islamic country, however, and we’ll give you a second chance here in America without even vetting you.

In closing, we’ll mention that this very report would likely be considered blasphemous in the eyes of Islam, and therefore its author could be subject to the death penalty (and we’re sure that some left-leaning crowds would love to see that!).