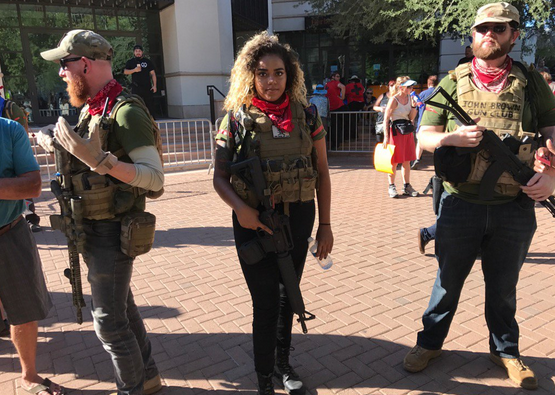 Since at least the days of the Tea Party movement, firearms have been a common sight at conservative leaning political rallies and protests. It’s not unusual to see men wearing military garb and carrying rifles and sidearms at these events. What is unusual however, is how this trend is expanding, because now we’re leftists show up at public events with firearms.

During President Trump’s rally in Phoenix, members of the John Brown Gun Club (who you may remember from this “training” video) showed up to the event with tactical vests and rifles.

Members of the John Brown Gun Club. They told me they’re in Phoenix to protect protesters from white nationalists pic.twitter.com/OGgT9qGuFE

And this isn’t the first time that this group has showed up to a right-wing rally. According to their website, members of the group (which organize under the Redneck Revolt network) were in Charlottesville as well, where armed protesters on both sides were seen.

Today, with hundreds more white supremacists expected to converge on Charlottesville, our Redneck Revolt branches worked together with local organizers to create and secure a staging area at Justice Park, within a short distance of the planned Unite the Right rally location, Emancipation Park (formerly Lee Park). Approximately 20 Redneck Revolt members created a security perimeter around the park, most of them open-carrying tactical rifles.

Perhaps this shouldn’t come as a surprise. Ever since Trump was elected, liberals have been buying guns and joining gun clubs in growing numbers, over fears that the president or his supporters are going to oppress them or tear down society.

To most Trump supporters that may sound laughable, but what is no laughing matter is the present situation. We have people on both sides of the political aisle who feel so threatened by the other side that they are bringing guns to these rallies. And they’re doing this at a time when so many divisive protests have turned violent without the aid of firearms. It certainly sounds like an explosive situation that could produce a lot of mayhem someday.

Or at least, that’s what many establishment figures are saying. The mayor of Phoenix recently expressed regret over the fact that so many people on both sides were carrying guns at the Trump rally, and criticized Arizona’s open carry laws. The LA Times even published an article which suggested that guns shouldn’t be allowed at protests at all.

There is another possible result of leftists and conservatives showing up to public events armed to the teeth. Perhaps if this behavior becomes commonplace, these events will stop devolving into violence, as we’ve seen dozens of times this year. Those Antifa punks who run around beating people in the streets, would probably think twice about antagonizing their opponents and sowing chaos if they knew that it could trigger a gunfight. They might just stay home if they know that their behavior would result in them, and everyone around them, being shot to pieces. I imagine that both sides would have more restraint.

It reminds me of an old saying. A polite society is an armed society.