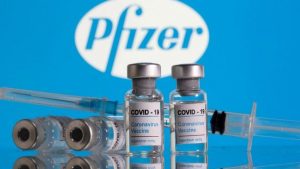 Ruby named the regulators involved in the scheme as the Food and Drug Administration (FDA), the United Kingdom’s Medicines and Healthcare products Regulatory Agency (MHRA), and the European Medicines Agency (EMA) for Europe.

She added the leaked emails provided by Latypova made it appear that the agencies “were working to meet an outside deadline, one that could have been set by [former] President [Donald] Trump’s Operation Warp Speed – in alignment with Pfizer.”

Latypova confirmed the existence of the leaked emails, adding they identified 140 people in the correspondences. Most of those people from different European nations were connected with EMA.

“All of them are highly trained professionals experienced in different diagnostic techniques, tests, and statistics. There are plenty of red flags that any of them could have identified – and surprisingly, [the vaccine] got shoved through the door very quickly,” she said.

“It’s all three of them obviously coordinating by email. All these three separate agencies [under] separate governments [in] separate continents, paid by separate sets of taxpayers. Yet you see them all coordinating. Not only is [the] FDA involved, but it’s [the] MHRA and EMA [too].

“They’re referring to Trump who already, by that time, lost the election – [but] it seems like they’re all still working on his timeline. I didn’t see emails referring specifically to [Operation] Warp Speed, but they clearly refer to [former Health Secretary Alex] Azar and Trump as being sort of drivers of the times. There are numerous emails that refer to these specific deadlines and timelines for approval, and even [one] email saying that ‘If we don’t meet this time, it’s going to be extremely difficult for all of us.’”

Latypova also mentioned that the leaked emails repeatedly refer to Pfizer, and touched on how the New York-based vaccine maker pulled some strings to ensure speedy approval of its vaccines. “There were two officials from EMA emailing each other and saying that ‘We need to share notes between us.’” (Related: FDA executive reveals truth about agency’s extremely close ties to Big Pharma in undercover video.)

Latypova also put forward a hierarchy based on the leaked emails. Bourla was at the top of everything, with Trump below him and Azar at the third rank. The American, European and British regulators followed – with the FDA pressuring its counterparts across the pond to expedite approval of Pfizer’s vaccine.

“If anybody asks you: ‘How can you say that there’s [a] global conspiracy? These are huge agencies in separate countries with separate rules.’ Well, here’s the evidence of a global conspiracy. They’re exchanging emails with each other about how to shove this through the door faster,” Latypova said.

True enough, all three regulators gave their thumbs-up to the Pfizer vaccine within the same time period. The FDA issued an initial emergency use authorization (EUA) to the shot on Dec. 11, 2020. The MHRA approved the vaccine for the U.K. on Dec. 2, 2020 – nine days before the FDA’s issuance of a EUA. Meanwhile, the EMA approved the vaccine for the entirety of Europe ten days later on Dec. 21, 2020.