Lawmaker: “America Is Heading In The Direction Of Another Harper’s Ferry’ 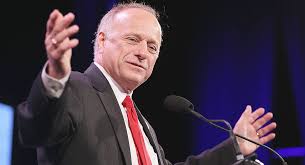 Representative Steve King believes that the United States is heading straight for another Civil War.  With the division rather obvious and each side viscously defending their idea of who should have power over everyone else and how much, could King be correct?

King, who is a Republican from Iowa warned in a tweet on Sunday that the United States is heading towards a civil war. “America is heading in the direction of another Harpers Ferry,” the conservative lawmaker tweeted on Sunday. “After that comes Ft. Sumter.”

According to The Hill, King was referring to the opening shot of the Civil War fired at Fort Sumter in the harbor of Charleston, South Carolina, on April 12, 1861.  Harper’s Ferry, which was then part of Virginia, and which King also referred to, was a town where militant abolitionist John Brown led a raid on a federal armory in October 1859, where he sought to start a slave uprising in an action that would later help push the country into a civil war.

America is heading in the direction of another Harpers Ferry. After that comes Ft. Sumter. https://t.co/5PmwlwcdSQ

With his comments about the U.S. heading toward war, Kind included an article which stated that Portland Occupiers (typically known to align on the far left of the political spectrum) shut down an ICE (Immigration and Customs Enforcement) government office and replaced it with a “refugees welcome” flag. “Occupy” protesters have been camping outside an ICE office in Portland, Oregon, leading the facility to temporarily shut down.  The occupiers say that they won’t leave until the Trump administration revokes its “zero tolerance” immigration policy. Portland’s mayor will not allow police action against the protestors either. (But one can all but guarantee that if right-wing activists shut down a Portland Planned Parenthood office, police would be allowed to use any level of violent force necessary to remove them.)

Trump ended the separations with an executive order earlier this month. However, it remains unclear how that will affect children already separated from their parents or guardians.

The division the government is adamant remains in the minds of Americans is evident.  The longer the peasants continue to fight amongst each other the longer the state can maintain and continue to increase its power over everyone else.

But in the meantime, if a civil war does break out among those who are fully brainwashed by the state, be sure to be prepared.  If you are low on food supplies, now could be a great time to stock up.  If you don’t have extra water saved, perhaps now is a good time to add a few dozen gallons to your prepper supply. Also be sure to check out the tips from this website and others on how to protect yourself from violent human beings.