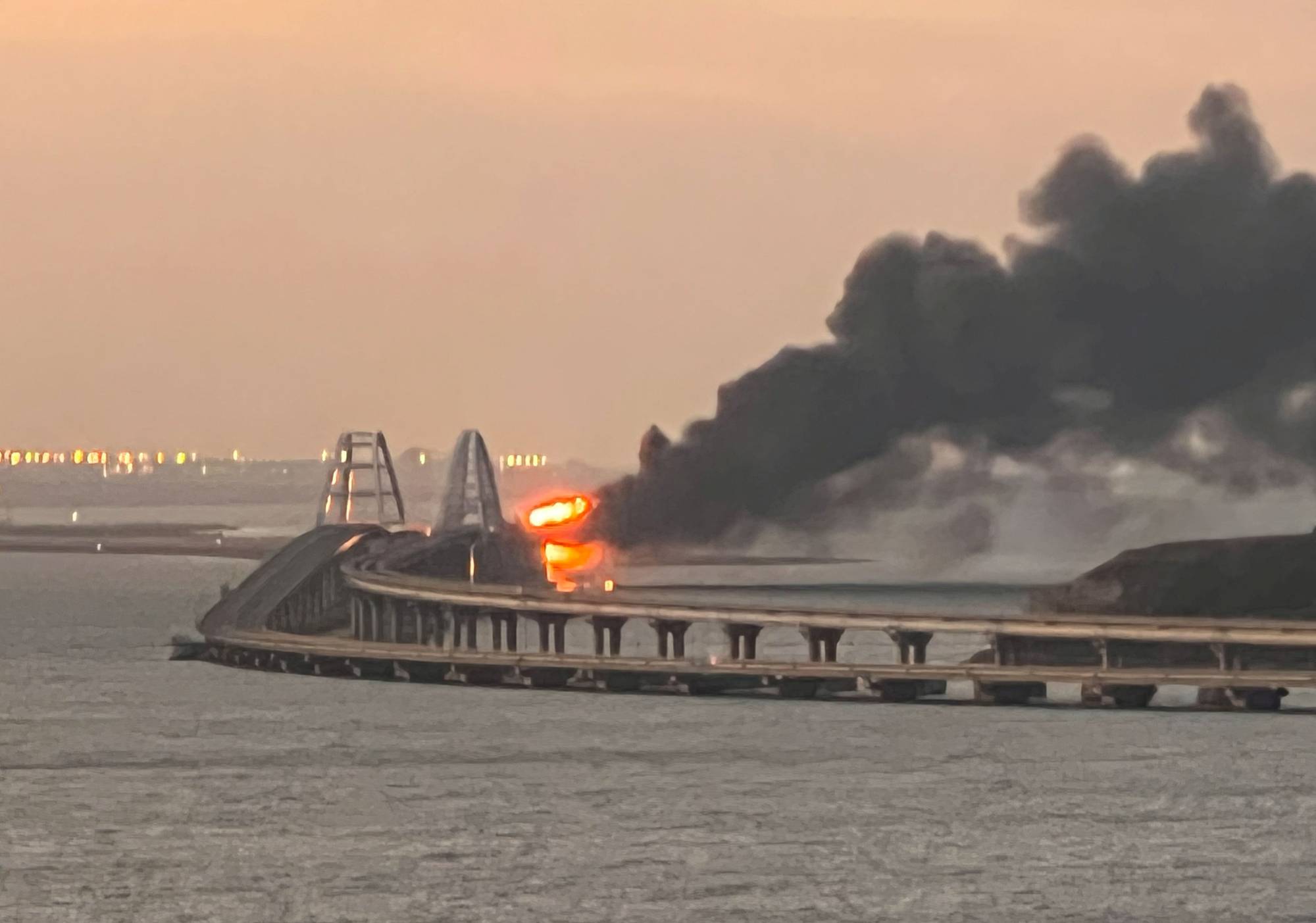 It only gets worse from here when it comes to this war. A large explosion has destroyed a portion of an important bridge that links Russia to Crimea. The bridge is a key supply route for Russian troops in southern Ukraine.

The Crimean Bridge which is also called Kerch Strait Bridge or Kerch Bridge is a structure 19 kilometers (12 miles) in length that passes across the Kerch Strait and links southern Russia to the Crimean Peninsula. The Kerch Strait links the Black Sea and the Sea of Azov.

Russian President Vladimir Putin was informed about the explosion and he ordered the creation of a government panel to deal with the emergency.

The Epoch Times‘ Mimi Nguyen reported that a truck exploded on the bridge around 6 a.m. local time. Russia’s National Anti-Terrorism Committee announced that the explosion caused a fire on the parallel rail section, where seven railway cars carrying fuel caught fire. The blast also caused a “partial collapse of two sections of the bridge.”

While the bridge undergoes repair, a ferry service will be provided later on Saturday. Crimea’s Head Sergey Aksyonov said on Telegram, per TASS: “A ferry service is ready to be launched, it will start operating later today. We will announce a timetable later.” -ZeroHedge

While no one has yet publicly claimed responsibility for the attack, Ukrainian President Volodymyr Zelenskyy’s aide, Mikhail Podoliak, posted on Twitter saying the explosion is “the beginning.”

“Crimea, the bridge, the beginning. Everything illegal must be destroyed, everything stolen must be returned to Ukraine, everything occupied by Russia must be expelled,” he wrote in English.

Crimea, the bridge, the beginning. Everything illegal must be destroyed, everything stolen must be returned to Ukraine, everything occupied by Russia must be expelled. pic.twitter.com/yUiSwOLlDP

Russia annexed Crimea from Ukraine in 2014 after a vast majority of people in Crimea had voted in a referendum in March 2014 to reunite with Russia and secede from Ukraine. The vote took place after anti-Russia, pro-E.U. factions overthrew then-Ukrainian President Viktor Yanukovych’s government, which wasn’t against Russia, in an armed coup in February 2014. -ZeroHedge

Since then, Russia has warned that Ukraine would try to use force to retake Crimea.

There are questions though. We live in a world of false flags, and propaganda designed to condition us into a mental state to accept war and atrocity so the ruling classes of the globe can thrive while they force us to kill each other. So what really happened?

Who leaked this surveillance videos so easily? pic.twitter.com/mryt3TzwiT

Russia is not going to let this go either. Much like the destruction of the pipelines, just because they haven’t retaliated yet doesn’t mean they aren’t going to. If they cannot deploy weapons on the ground, they can go to the air. This could have just ratcheted up the tensions in the war. The pipeline destruction was a point of no return, but this is going to inflame even further.