Keep It On The Down Low: Top 5 Ways To Hide Your Guns and Gear 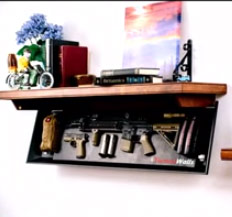 For those who store food, preparedness supplies, gold, guns and ammunition, one of the most immediate concerns is keeping your investment safe. Naturally, given our reasons for stockpiling to begin with, the last place we want to be storing anything is with a “trusted” third party. Thus, things like safe deposit boxes are out, as are storage facilities unless you are using them as a secondary backup. Burying a cache on your property or in the wilderness is great, but there are certain things you’ll want to keep close by, especially as it relates to self defense or emergency cash.

This, of course, presents a challenge, because every time you leave your house you’ll wonder if the thousands of dollars you’ve invested in emergency supplies will be there when you come home.

The following video from the Bug Out Brothers provides some creative ways for you to keep at least some of your belongings relatively safe. Nothing is 100% foolproof, but we can certainly make it difficult for thieves to find and take what we’ve spent so much time earning.

From a simple bookshelf to a standard wall outlet, here are the Top 5 Ways To Hide Your Guns and Gear:

Here’s another short video with ten survival tips and tricks that just might save your life:

Feel free to share any ideas, tips or strategies in the comments below…

3 Ways To Hide Valuables At Home

The Gut Wrenching Reality: One of the Best Bug-Out Strategy Guides You’ll Ever Read