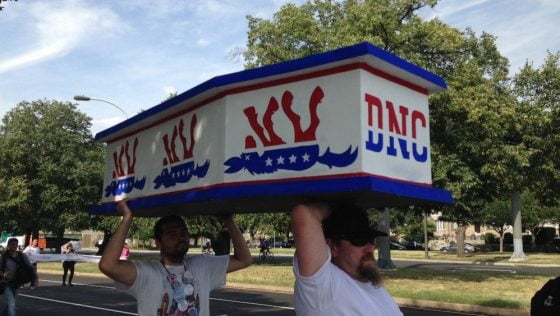 A federal judge in New York has tossed out a Democrat lawsuit against the Trump Campaign, Russia, and Wikileaks, saying the claims were “entirely divorced” from the facts. Arguments in the Democratic National Committee’s lawsuit claimed that the Trump campaign colluded with the Russian government and Wikileaks to win the 2016 presidential election.

The DNC sued in April 2018, claiming that the Trump campaign welcomed “help” from Russia and WikiLeaks, who obtained and published the party’s emails in an effort to sway the United States electorate during the 2016 presidential election, in which Donald Trump defeated Democrat Hillary Clinton. On Tuesday, US District Judge John Koeltl disagreed.

Background on the lawsuit, via @CourthouseNews.

The DNC “raises a number of connections and communications between the defendants and with people loosely connected to the Russian Federation, but at no point does the DNC allege any facts … to show that any of the defendants – other than the Russian Federation – participated in the theft of the DNC’s information,” Koeltl wrote in the 81-page opinion dismissing the lawsuit with prejudice.

There can be no liability for publishing materials of public interest under the First Amendment to the U.S. Constitution, so long as those disseminating it “did not participate in any wrongdoing in obtaining the materials in the first place,” Koeltl wrote, explaining that the DNC offered no proof that either Trump campaign staff or WikiLeaks did so. –RT

“The Witch Hunt Ends!” Trump tweeted celebrating the ruling, noting that Koeltl was “a highly respected judge who was appointed by President [Bill] Clinton.”

The judge did say that Russia was responsible for hacking the DNC servers and obtaining the emails released to Wikileaks, though this has never actually been proven and remains an assertion based on the claims of DNC contractor CrowdStrike. Koeltl also told the DNC that they can’t actually sue the Russian government anyway due to the Foreign Sovereign Immunities Act.

The DNC lawsuit’s dismissal is the latest victory for Trump in the fast-unraveling “Russiagate” narrative which has turned out to be little more than a hoax, concocted to explain Clinton’s loss to the president. A two-year investigation by special counsel Robert Mueller concluded in March, failing to find any evidence of Trump’s “collusion” with Russia during the 2016 campaign and trying instead to paint Trump as “obstructing” the probe without actually saying so or leveling charges against the president.

In the book, Deep State Target: How I Got Caught in the Crosshairs of the Plot to Bring Down President Trump

, George Papadopoulos details how he got swept up in deep state madness.

This book is the only firsthand account that proves the attempted sabotage of Donald Trump’s presidential campaign by American and international intelligence services, from former Trump advisor George Papadopoulos―whose global network and clandestine meetings about Hillary Clinton’s hacked emails made him the first target of Spygate, the Mueller investigation, and the Russian Collusion Hoax.