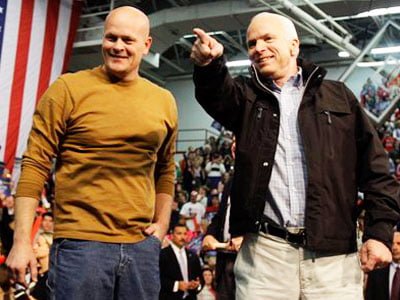 John McCain seems like a stand-up guy when he’s in front of the camera. But if one were to get behind the scenes of his or any other politician’s campaign and daily operations we suspect that most Americans would have a completely different opinion of their elected officials.

Joe the Plumber certainly has something to say about it:

Wurzelbacher touched on several different points during his speech, and many of them were surprising. He said he doesn’t support Sarah Palin anymore. Why? Because she’s backing John McCain’s re-election effort. “John McCain is no public servant,” he told the room, calling the 2008 Republican nominee a career politician.

I pointed out he’d just be plain old Sam Wurzelbacher of Ohio – Joe the Plumber wouldn’t exist  without McCain. His response was blunt. “I don’t owe him shit. He really screwed my life up, is how I look at it.”

Wurzelbacher said, “McCain was trying to use me. I happened to be the face of middle Americans. It was a ploy.”

So why’s he still milking the Joe the Plumber image, appearing at conservative events across the country? Wurzelbacher says it’s his duty to take advantage of the platform he’s been given. He wants to talk up the issues he cares about, and encourage the grassroots tea party movement.

Frankly, we think it’s great that Joe the Plumber is ripping John McCain’s butt, because he deserves it. John McCain, like Sarah Palin and pretty much all of Congress, is more of the same and needs to go home. Unfortunately we don’t have term limits, so the only way for this to happen is for the people to step up to the plate on election day.

Joe the Plumber may have his share of problems and imperfections, but that’s what makes him a good representative of the peoples’ ideas. He’s much closer to mainstream America than a politician who’s been living in DC for 20+ years. He didn’t want the fame that he received – it just happened to turn out that way after he openly questioned a Presidential candidate.

Keep yappin’ Joe. So far we like what you have to say!