James Woods: “I guess they want civil war… would not end well for them” 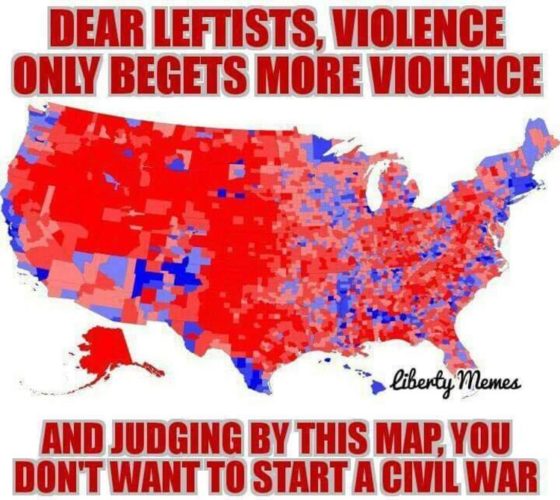 The extreme left is desperately trying to instigate a civil war, and prominent left-wing “leaders” are fueling the fire.

Take, for example, recent calls for violence from none other than Hillary Clinton, as James Woods pointed out on Twitter last night:

Not surprising that this wretched hag would jump on the violence bandwagon driven by Democrats these days. I guess they want civil war. That would be a terrible thing and surely would not end well for them. #DemocratViolence pic.twitter.com/LSzXc0ymCH

This is one reason why we fight so hard to defend the Second Amendment.

We would be remiss not to consider the Left may attempt to seize power through non-democratic means. Hillary basically said as much. If they don’t take the House at midterms they will relegated to political irrelevance for a decade, maybe more. They may consider the risk worth it pic.twitter.com/EQyC3K2lwm

Consider this, they want a civil war with the population that believes in the 2nd amendment and isn’t afraid to use it? Sounds like a rational democrat plan.

It was “her turn,” and if she can’t have her way, she’ll just burn the house to the ground. #HillaryGoesNuts https://t.co/1dmKYmHK0w

What interesting to me is that she basically saying, "Give us back our power and then we'll be civil."

We know that is a lie and a promise they'll never keep.

Ambassador Stevens could have told us a lot -regarding her lust for power and her disregard for human life.

What she is actually saying is if Dems don't regain control, they will become even more violent.

She's nuts
This isn't strength, this is chaos
Which is actually the goal, create the chaos, then govt fixes chaos, then citizens hand over their rights one by one to keep chaos from happening again.
It's the socialist/Marxist playbook to make people dependent on govt
Not in USA

The Democrats have no platform, no message, nothing to stand on so their only option is to intimidate, bully and harass any republican they come across! They don’t believe in free speech and due process, We need to all ge along, we live here together