James Corbett: This Is The Battle For Humanity! The Technocratic Enslavement End Game! 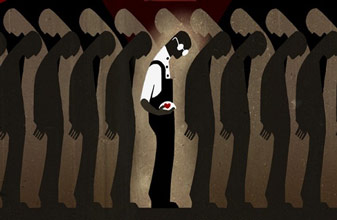 Josh Sigurdson recently spoke with James Corbett of The Corbett Report about the heightened level of tyranny throughout the world creating a prison planet over the course of 2020. With the excuse of an illness, the governments of the world have managed to use a crisis to their extreme benefit and to the absolute enslavement of the public.

Was this COVID-19 thing created in a lab? At this point, it honestly doesn’t even matter.  Regardless of whether it was or was not, how’s it being used against the public? What is the ultimate end game? James digs deep into the technocratic global government being created, influenced heavily by China, and utilizing the crisis to install social credit tied to bank accounts.

This is THE ONE LAST battle for humanity as James points out. This is extraordinarily important and cannot be disregarded.

With social credit scores tied to medical tyranny, if we don’t act now, we may be done forever. Time is running out.

This is it. Your time to figure out what’s going on is very limited. More chaos is incoming.  We’ve already been promised the “darkest Winter” and a contested chaotic election. If you want to know the future if the New World Order is successful, look no further than China. That’s the goal. Social credit and medical tyranny.  As Corbett says, there is no “fixing” the system from inside the system. If that was possible, we wouldn’t be in this situation as Donald Trump promised he’d take down the “deep state.”  We are far more enslaved now than we have ever been. So Trump either lied, has no power to take down the deep state, or is in on the plan to roll out the New World Order. Either way, none of those are going to sit well with half the voters, but truth fears no scrutiny. These are the technological tools of enslavement and trump is pushing them.

This video is incredibly powerful, and as both Corbett and Sigurdson say, the time for education is in the past.  If you don’t get what’s happening by now, you may not ever get it. If we start messing with the human genome and lose bodily autonomy (vaccine coercion) and refuse to wean ourselves off this horrific system of enslavement, humanity could be doomed. Our decisions will dictate our future.