It Has Begun: Wise Up and Stock up as Food Shortages and Price Hikes Are Coming Before Year’s End

Editor’s Note: One of the key trends we’ve seen over the last ten years is an unabated rise in prices for essential goods that include food, energy and other commodities. This year, as was the case in the 1930’s, we’ve seen quite a significant change in the weather. We can go back and forth about the causes, but for all intents and purposes this would be an exercise in futility. What’s important to us personally are the consequences. In the following article Lizzie Bennett of Underground Medic highlights what those consequences will be. The key takeaway is that everything, especially your food, is about to skyrocket in price. If you have the means to do so, consider stockpiling additional goods, especially those essential dry goods like rice, beans, wheat, and corn. One of the best investments you can make is to buy at today’s lower prices and consume at tomorrow’s higher prices. It’s a strategy that would have yielded you 50% – 100% gains over the last four years, and it’s one that will continue to be a sound investment. Moreover, unlike paper investments, when you own commodities stored in your home there is no counter-party risk. Get prepared for long-term emergencies and save money while you’re at it!

Stop for a moment and think about what’s happening weatherwise around the world.

California is in the middle of a drought so severe that domestic supplies may be cut in a matter of weeks. California produces a massive amount of the food consumed in the United States.

Extreme cold in the United States has killed livestock in the hundreds of thousands.

Florida farmers are  looking at massive losses from cold weather not just ruining citrus crops, but squash, cucumbers and herbs.

Wheat growth in Texas is stunted by continuing cold weather.

The fishing industry in Indonesia has taken a hit because of bad weather.

Peru, Venezuela, and Bolivia have experienced rainfall heavy enough to flood fields and rot crops where they stand. Volcanic eruptions in Ecuador are also creating problems due to cattle ingesting ash with their feed leading to a slow and painful death.

Parts of Australia have been in drought for years affecting cattle and agricultural production.

Rice production in China has been affected by record low temperatures.

Large parts of the UK are underwater, and much of that water is sea water which is poisoning the soil. So wet is the UK that groundwater is so high it is actually coming out of the ground and adding to the water from rivers and the sea. With the official assessment being that groundwater flooding will continue until MAY, and that’s if it doesn’t rain again between now and then. The River Thames is 65 feet higher than normal in some areas, flooding town after town as it heads to the sea.

Even the boreholes that keep an eye on groundwater levels can’t cope, this one blew its cap off yesterday. 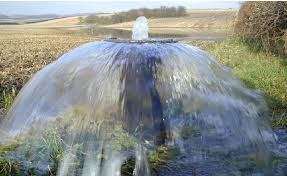 Crops are going to be severely affected with some farmers saying they will not be able to plant at all this year due to salt pollution from sea water inundation.

It’s time to ramp up your food prepping. Weather around the world is causing problems with food production and there is no reason to think these problems are just going to go away.

Although I personally don’t buy into the global warming hype there is no doubt that last years weather was bad enough around the globe to affect food security. The issues I’ve listed above are a few amongst many and we are only six weeks into the new year,

As I typed that last paragraph news alerts have gone out warning of 100mph winds, another few inches of rain and a further 23 flood warning issued to join the 300 plus already in force in the UK.

One geographical region having weather bad enough to damage food production usually results in higher prices because you have to import it from other countries. What happens though when those other countries don’t have food to sell you because they have barely enough to feed their own people?

It’s time we all woke up to what is happening. It’s highly likely that certain foodstuffs will be in short supply by the end of this year. What is available is going to be a good deal more expensive than it is now. Many will not be able to afford the prices asked for basic commodities.

Vitamin deficiencies, malnutrition and disease outbreaks always occur when any form of an economic shift takes place. There is no reason to think that our situation a few months down the line will be any different.  Food shortages and high prices are often a tipping point for wider unrest.

It has begun. Urge those who you know are unprepared to wise up and stock up, time may be shorter than they think.

Lizzie Bennett has extensive medical and trauma training and is the author of Underground Medic. In addition to her experience as a catastrophic emergency medical practitioner, Lizzie is a researcher, analyst and lecturer in fields that include anaesthetic pharmacology, operating department practice, anaesthetics, and human anatomy. She is the author of the Armageddon Files, a series on emergency medicine in off-grid scenarios.

Also Read: Famine Is Coming to a City Near You