Israel’s Netanyahu Vows There’ll Be No End To Conflict 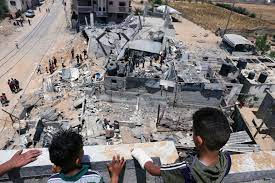 Israeli prime minister Benjamin Netanyahu has vowed that there will be no end to the current conflict between Israel and Hamas. His promise comes not long after Israel airstrikes killed an Islamic Jihad commander in Gaza.

This is likely not going t end well at this point. In a Twitter post and statement on Monday, the IDF said that Hussam Abu Harbeed, Islamic Jihad’s northern division commander, had been killed in an airstrike. The tweet was accompanied by a video of the attack on Abu Harbeed’s compound.

The statement says that Abu Harbeed and his forces consistently led attacks on Israel and that he was responsible for a number of missile launches. One of the attacks took place on the first day of the current round of fighting, injuring one Israeli. The IDF said he had been a commander in the Islamic Jihad group for 15 years.

The IDF statement added that there had been around 60 missile launches by militant groups from Gaza on Sunday, 10 of which had landed in the enclave and did not trouble Israel’s Iron Dome defense system.  -RT

Israel claims it has neutralized more than 130 terrorists in the last week, while Palestinian militant groups had fired more than 3,150 missiles at Israel, killing 10, with the alleged attempt to overwhelm the Iron Dome, Israel’s missile defense system.

Additionally, on Saturday, Netanyahu said there would be no ceasefire in the fourth war against Gaza, adding that he “wants to levy a heavy price” on the Hamas militant group. He has also said he will continue to attack Gaza “as long as necessary.” Turkey’s ruler has said that he will not “remain silent” when it comes to the killing of Palestinians by Israel.

Turkish President Recep Tayyip Erdogan said Friday that Ankara is “furious” over Israeli airstrikes in the Gaza Strip and lashed out at countries that “remain silent” in the face of Israel’s operation. “We are both saddened and furious at the cruelty of the terrorist state of Israel against Palestinians,” Erdogan told a virtual meeting of his ruling Justice and Development Party. “To stand against Israel’s aggression in Palestinian cities, Jerusalem is a duty of honor for humanity,” he said. “By attacking the sacred sites of all three religions, terror state Israel has crossed all boundaries,” he added according to Al-Monitor.

If any other ruling class decides to send their slaves into this conflict, we could see an advancement toward a global conflict. As of right now, there appears to be no end in sight