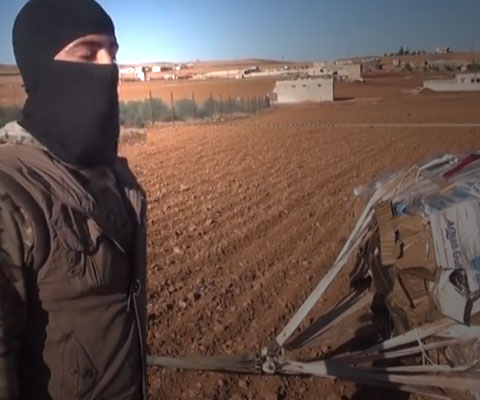 This analysis was originally published by Brandon Turbeville at Activist Post.

The fact that the United States and NATO are arming the death squads fighting the secular government of Bashar al-Assad is, by now, accepted news in both the alternative and mainstream media circles. However, due to the U.S. State Department’s and its media mouthpieces’ incessant claims that there is such a thing as “moderate” rebels vs. extremist rebels in Syria, it is not considered “credible” or mainstream to suggest that the United States is, in fact, arming extremists.

Of course, the reality is that there is no such thing as “moderate rebels” in Syria. The truth is that the FSA, largely presented as “moderate,” is, in actuality, the same thing as Al-Qaeda, Al-Nusra, and ISIS.

Regardless, the mainstream press and the governments that it represents continue to push the deception of “moderates” as well as the claim that NATO is opposed to ISIS. These claims, however, are becoming increasingly difficult to maintain as more and more evidence emerges from the Syrian front demonstrating them to be patently false.

Such evidence involves reports producing evidence of ISIS’ possession of American military hardware and strong suspicion that the United States is providing direct guidance and assistance to the terrorist organization.

For instance, in a report published by The Independent, entitled, “How did Islamists receive American weapons? See the evidence from guided missile that exploded near Syrian front line,” Robert Fisk writes that

Syria’s special forces troops are strung out across a pinnacle of hills here just north east of Lattakia on one of the country’s most dangerous front lines, under daily missile attack from reinforced rebel forces now supported by Isis.

The officers, all of whom are paratroopers, speak of new tactics and upgraded weapons used against them since Isis seized the Iraqi city of Mosul – and some of the radio traffic they listen to from their enemy is in the Chechen or Georgian languages.

Intelligence reports speak of a unification of various rebel factions calling themselves the “Legion of the Coast”, a clear sign that the Isis-inspired rebels – including Isis supporters themselves – intend to strike westwards towards the Mediterranean, scarcely eight miles away.

It’s fair bet that a big battle is shaping up in these pine-covered mountains.

The soldiers themselves talk of the thermal heat-seeking missiles fired at them with detailed knowledge, and agree that the mixture of Islamist groups above and to the east of them are carrying out daily probing attacks to test their defences.

Intriguingly, their surveillance patrols are returning at dawn to report the sound of unidentified night-time aircraft flying into Syrian airspace from Turkey and then east, deep into Syria.

The aircraft flying overhead at nighttime is obviously suspected to be American or at least NATO-operated flights, although the Syrian forces are unsure of exactly who the aircraft belongs to or even if the flights are actual planes or drones.

Fisk continues with his description of the arms that ISIS militants have recently procured by writing,

But their officers talk of the new TOW anti-armour weapons that have appeared in rebel hands.

One officer showed me an Islamist website videotape of rebels firing a heat-seeking rocket at his own encampment just to the north of here at Qastel Ma’af. The missile can be seen exploding but in fact disintegrated against concrete revetments around a tank.

Most notably, Fisk recounts how parts of an ISIS-fired missile, which were brought in for evaluation by the Syrian Special Forces, actually contained damning proof that the weapons were American made. He writes,

But when a corporal dragged a sack load of missile parts into a room in this Syrian hill-top fortress, it contained some fascinating evidence of the rebel armoury. Most missiles fragment into thousands of pieces on detonation but just over a month ago – on 26 September – a guided missile exploded deep beneath sand and earth and the fragments clearly show the name of its American arms manufacturer, circuit boards and the coding of the weapon.

Part of the missile identifies the “Eagle-Piche IND (Indiana) INC.” company as the manufacturer and says, in English, that it is “helium charged”, adding – rather ironically as it turns out — the words: “CAUTION — CONTAINS 6400 PSIG He (high explosive), FEDERAL LAW FORBIDS TRANSPORATION IF REFILLED — PENALTY UP TO $25,000 AND FIVE YEARS IMPRISONMENT (49 USC 1809). The Syrians do not know how this weapon – which appears to have been manufactured as long ago as 1989 – made its way from the US to the hands of their country’s Islamist rebels – but it would not be difficult for the Americans to find out. Its full computer coding reads: DOT-E7694 NRC6400/11109/M1033 79294 ASSY 39317 MFR 54080.

A battery tube from another missile fired on the fourth of last month carries an inscription indented in the metal: “132964 Battery thermal MFG DATE 12/90 LOT No (indecipherable numeral then 912 S/N 005959.”

These codes should make it easy for the Americans to identify the purchaser – or receiver – of the weapon, if they choose to do so.

Fisk goes on to ask the pertinent question of “How did the Islamists receive these American weapons? On the international arms market? Or from ‘moderate’ rebels who were given American weapons and then sold them to the highest bidder?”

The answer, of course, is clear.

ISIS received these weapons because the United States and NATO have been funding and arming ISIS from the very beginning. The U.S. has been arming the terrorists ever since 2010, when violence, shootings, and indiscriminate killings erupted in Syria (reported as “peaceful protests” in Western media). Before, during, and ever since, the United States and NATO have continued to support, train, arm, fund, and direct the death squads attempting to overthrow the Assad government.

From covert CIA assistance to actual coordination from death squad experts like Robert Ford, the United States and NATO were directly responsible for the Syrian crisis. By supporting the “rebels” early on, NATO was, in fact, supporting ISIS, since ISIS is nothing more than the current name for what was already in place in Syria when NATO embarked on its destabilization campaign in 2010.

Similar assistance was provided by Syria’s neighbors and fellow Middle Eastern countries with Saudi Arabia, Qatar, and a number of other Gulf State Feudal monarchies providing many of the terrorists and the money needed to pay and supply them. Jordan provided training grounds and logistics, Turkey provided the conduit and air support, and Israel provided air cover and intelligence.

Such coordination and military support continues in 2014, with the U.S. now engaging in air strikes that are aimed not at ISIS but at Syrian infrastructure.

In addition, many death squad fighters were recently re-armed by having arms passed from the United States to terrorist brigades that are presented as “moderate” by the mainstream media. These terrorists then immediately passed these arms to Jobhat al-Nusra.

While the revelations that ISIS forces have access to as well as possession of U.S.-made missiles are by no means shocking revelations, they are yet one more puzzle piece fitting together the tangled web of deception that the United States and NATO have woven in their effort to overthrow Bashar Al-Assad and the secular Syrian government.

Brandon Turbeville is an author out of Florence, South Carolina. He has a Bachelor’s Degree from Francis Marion University and is the author of six books, Codex Alimentarius — The End of Health Freedom, 7 Real Conspiracies, Five Sense Solutions and Dispatches From a Dissident, volume 1 and volume 2, and The Road to Damascus: The Anglo-American Assault on Syria. Turbeville has published over 300 articles dealing on a wide variety of subjects including health, economics, government corruption, and civil liberties. Brandon Turbeville’s podcast Truth on The Tracks can be found every Monday night 9 pm EST at UCYTV.  He is available for radio and TV interviews. Please contact activistpost (at) gmail.com.