Over the weekend a mainstream media web site on the east coast published, presumably in the interest of public safety, a complete list of individuals and businesses that are licensed to carry or own handguns.

Much to the amusement of those who would confiscate firearms from law abiding citizens, the list, complete with an interactive map, essentially allows those who are preparing to commit such crimes as burglary, robbery or worse to locate specific addresses where residents are armed.

The problem, of course, is that in their haste to publicly out and embarrass legal gun owners, The Journal News actually did exactly the opposite of the intended purpose of their exclusive breaking report.

You see, now when a criminal gang decides to target a particular home they can utilize the new map to zoom in on specific homes in a neighborhood to determine if they will be faced with any sort of danger should they choose to attack a particular target.

Put yourself into the criminal mind and consider what you might do should you be compelled to rob a home or business at gunpoint. With that new map available to you, would you be headed to the residence where there is a strong likelihood that someone is armed, or would you skip over that particular house and head to where you know there would be little, if any, resistance?

It’s the epitome of irony.

When gun-grabbers and their ilk laugh about the new interactive map publicly exposing lawful gun owners, what they have actually done is outed those citizens who have no means of defending themselves.

It’s pretty safe to say that if one were to have a sign placed in front of their home, Americans would overwhelmingly prefer to have this one: 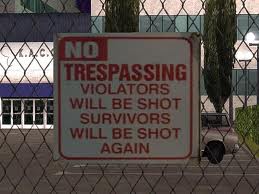 As opposed to being the neighbor in this photo: 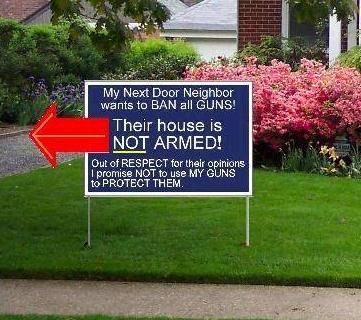 In the near future criminals are going to realize the internet is a powerful tool for determining the feasibility of striking certain targets. It’s only a matter of time before flash mobs begin to organize, not against gas stations or pharmacies, but private citizens and residences. Should such a thing happen, and fifty people kick in your door and intend to have their way with your family and property, those millions of assault rifles that have been flying off the shelves around the country are going to come in real handy.

While we cherish our privacy and agree that the outing of gun owners has gone beyond responsible journalism, if their is going to be a list, we’d rather be on the one that has our residence listed as heavily armed as opposed to the alternative.

You may be one of those proud non-gun owners who didn’t make the east coast list.

And if you are, you should be terrified, because you may very well be in grave danger.