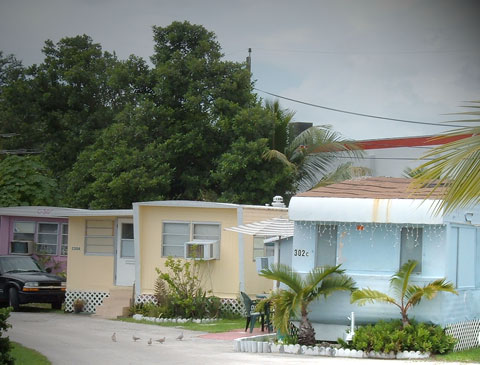 America is filled with lots of poor people these days, and there’s plenty of money to be made off them.

With Wall Street already turning once-homeowners into renters in housing neighborhoods, billionaires and entrepreneurs are now investing in trailer parks, where they are making considerable fortunes off of raising the rent on the poorest among us.

The economic concept is as easy as shooting fish in a barrel.

Generally speaking, these people moved into trailer parks for the cheap rent, and even with rent prices soaring, these poor people have nowhere else to go.

“The economics are compelling… there’s a lot more poor people than rich people,” one investor said.

The London Guardian spotlighted this trending market for moguls, following a bus load of ‘boot campers’ at Mobile Park University who are learning how to profit from the poor, many of whom are ironically found immobile and ‘trapped’ in their mobile homes:

According to the Guardian:

Trailer parks are big and profitable business – particularly after hundreds of thousands of Americans who lost their homes in the financial crisis created a huge demand for affordable housing. According to US Census figures, more than 20 million people, or 6% of the population, live in trailer parks.

It is a market that has not been lost on some of the country’s richest and most high-profile investors. Sam Zell’s Equity LifeStyle Properties (ELS) is the largest mobile home park owner in America, with controlling interests in nearly 140,000 parks. In 2014, ELS made $777m in revenue, helping boost Zell’s near-$5bn fortune.

Warren Buffett, the nation’s second-richest man with a $72bn fortune, owns the biggest mobile home manufacturer in the US, Clayton Homes, and the two biggest mobile home lenders, 21st Mortgage Corporation and Vanderbilt Mortgage and Finance Company. Buffett’s trailer park investments will feature heavily at his annual meeting this weekend, which will be attended by more than 40,000 shareholders in Omaha.

Even for those who own their own trailers, the cost of moving them is insurmountable – with thousands of dollars to relocate a trailer too much a burden to escape the rising floor of rent prices.

At its worst, investors are becoming slumlords with a captive market of poor people, with new pressures from a market that is none too forgiving of the have-nots.

At its best, the opportunities are lopsided and seem to be squeezing those who can least afford it.

Today, the profits are virtually assured, with rent prices often ‘more than doubling’ over night.

“Raising the rent is typically part of the day one purchase, because often the ‘mom and pop’ [previous, family-run owner of a park] has not raised the rent in years so it’s far below market.

“We traditionally raise our rents by an average of 10% a year or something like that, and it’s pretty much true for the industry. Our world record [rent increase] went from $125 to $275 in one month.”

Not so much back in the 50s and 60s. America was too affluent then, and this kind of investing in low income mobile home housing wasn’t possible – or at least not readily profitable.

Frank Rolfe, who runs Mobile Home University, explains why he focuses on family trailer parks, and why he encourages others to do so as well:

“Family parks tend to have higher expenses. They have households that use more water, they wash cars, whatever. But the big thing is they can really tolerate rent increases really well. So family parks are our favorite parks. Almost all the parks we have, with rare exceptions, are family parks. And it pretty much works throughout America because there’s so much need for affordable housing right now. It didn’t work at all back in the 50s and 60s – there were no poor people.”

A hand out shown in the video reads, in bold: “Can tolerate rent increases better.”

Raising rents is the whole point of buying a trailer park, of course.

“The rents do not go down,” prospective park buyers are also told.

That pretty much sums up how a class of rent seekers are squeezing the poor for more money, and making it even harder for them to get ahead.

Of course, these 1-percenters and entrepreneurs are just swimming in the waters that we all live in – with market forces creating massive whirlpools and tidal forces after six plus years of cheap money from the Fed’s quantitative easing for those at the top and a difficult if not crushing job market for average and struggling Americans, many of whom are struggling just to make ends meet.

Many of the park residents interviewed in the Guardian’s video are on fixed income or working low wage jobs. Most said they understand the business aspect of raising rents, but thought the rates were too high to handle from a personal standpoint.

One resident, who liked his park, said he was forced to move because of increasing rents, while discussing other residents who were selling their trailers for $100 – or even giving them away – because they couldn’t find anyone to buy them.

“They are trapped.. actually they are,” the resident told the Guardian’s Rupert Neate.

“But did you feel bad at all, with people on social security or earning minimum wage, and then suddenly they’ve got to pay double the money?”

“I didn’t feel badly about it, because I’m bringing it to market, and I don’t dictate what market is. So to be honest with you, if we hadn’t raised the rent, the park wouldn’t exist, because it would have been made into a different use.”

That may be, but as many have pointed out, the effect of Federal Reserve intervention to the 2008 crisis has been a massive inflation of asset prices, putting more pressure on everyone down the line. Wolf Street noted that: “Speculative buying drove up prices beyond the reach of many potential buyers.”

Rolfe said he sends letters to his residents ahead of rent surges, but few, if any, move on account of the extra cost:

“If you don’t like this or you think you can do better, here’s a list of all the other parks in Grapevine and a list of the owners,” he said in the letter. “Go ahead, call them if you want to move. How many customers do you think we lost? Zero. Where were they going to go?”

And it’s not just the poor who are facing these challenges.

It is worth noting, as SHTF has before, that homeownership is now at its lowest point since the 1980s, and it is primarily affecting young, middle class families who would have been investing in their biggest and most personal asset, but instead, find themselves renting single family homes from distant brokers on Wall Street:

The American Dream is dissipating at a record pace, Wolf Richter argues:

Homeownership in the fourth quarter dropped to 63.9% on a seasonally adjusted basis, the lowest level since Q3 1994, according to the Commerce Department. In all of 2014, homeownership plunged by 1.2 percentage points, the largest annual drop in the history of the data series going back to 1980.

These are the age groups where the first-time buyers are concentrated. And they’re being sidelined.

That’s because home owners, particularly first time buyers, are being priced out and pushed way, while renters – in both apartments and homes – are rising.

Since 2008, homeownership has been fading in all age groups. But in these two age groups, it plunged respectively 6 points and 7.9 points!

And the bitter irony in the report? The vacancy rate in the rental market dropped to 7.0%, the lowest since 1993. America is turning into a country of renters.

Along with the decline of the middle class, come the rise of Wall Street mega-landlords and, indeed, mega-slumlords putting new rent pressures on the poor.