Numerous financial institutions experienced problems with ATM machines Sunday morning, providing some insight into what it might look like if the President institutes a bank holiday, long rumored to be part of the globalist agenda to take down the U.S. dollar:

Following rumors of a â€œbank holidayâ€ that could limit or prevent altogether cash withdrawals later this week, Twitter and other Internet forums were raging yesterday about numerous ATMs across the country that crashed in the early hours of Sunday morning, preventing customers from performing basic transactions.

Itâ€™s unknown whether the crashes were partly a result of a surge of people trying to withdraw their money in preparation for any feared bank shutdown, or if mere technical glitches were to blame. The fact that the problem affected numerous different banks in different parts of the U.S. would seem to indicate the former.

The Orange County Register reported that the problems were â€œpart of a national outageâ€ which prevented people from performing simple transactions such as cashing checks and withdrawing money.

â€œTwitter is going crazy with reports of ATMs and online accounts going down as of 01:00 hours EST of the 7th of November 2010,â€ writes Brennan [blogger, reporter]. â€œThis is happening to many banks all across America. Some are trying to say that it is a computer glitch to do with the change in Daylight Savings Time, but I will call BS on this as we manage to put our clocks back over here in the UK without knocking out ATMs and online accounts nationally.â€

Brennan questions whether the outages were the first warning shots in a move to â€œdevalue the dollar,â€ just days after Federal Reserve chairman Ben Bernanke sparked an international currency war by announcing that the Fed will buy $600 billion of U.S. government bonds over the next eight months.

The fact that more than ten different banks had the same issues suggests that it could have been a problem with the clocks within the bank ATM software. We’d like to believe that this was a “glitch” due to the Daylight Savings change, but you never know.

In the news this week is the G20 meeting where China and Russia are putting serious public pressure on the U.S. government regarding our quantitative easing policies, with China going so far as to imply that it is the U.S., not China, that is the currency manipulator.

We are embroiled in a financial, monetary and economic situation unlike any of our policy makers have ever experienced. At this point, nothing is outside the realm of possibility. FDR closed the banks once also, and when they reopened the dollar had been devalued by some 60%. Given that our elected officials, the Fed and Treasury have taken unprecedented steps already, to the tune of trillions of dollars, as well as seizing control of private institutions, it seems that they are willing to pretty much take whatever steps they deem appropriate at the time of whatever crisis is happening.

Our recommendation if the financial S hits the fan is to have cash, PM’s and other barterable assets on hand at all times, just in case.

A bank holiday doesn’t necessarily mean that the entire economic, social and political systems of the U.S. will come to a crashing halt, but it could certainly mean very hard times ahead. The only reason a bank holiday would occur would be to basically give the banks time to implement new government mandated policies like devaluation, withdrawal limits and seizure of safety deposit box assets. During the 1933 holiday instituted by FDR, the government also required that only solvent banks be reopened. Today, that might mean that a majority of banks would end up being shut down. Of course, the larger banks – those that are too-big-to-fail and funded by U.S. taxpayers, will probably be reopened as the banks of last resort (even though they are broker than everyone else).

People will likely try to run on the banks, but they’ll be closed, and probably heavily guarded – perhaps by private security personnel, perhaps by riot police, perhaps by military response teams under a declaration of martial law.

The point is, it can happen, it’s happened before, and you should be thinking about it as a distinct possibility in the future.

The last thing you want to do if the banks are closed is to end up in a crowd like this thinking someone’s actually going to give you your money back: 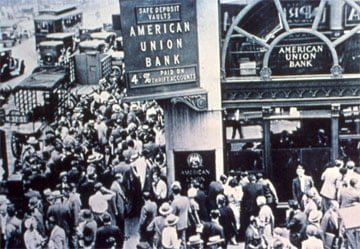