Insider Warren Buffet Knows A Massive Crash Is Coming: “Has $70 Billion On The Sidelines… Clearly Anticipating The Biggest Buying Opportunity Of His Life” 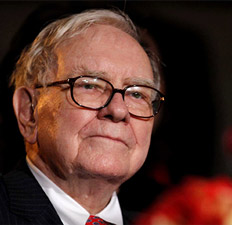 With the U.S. stock market near all-time highs and financial pundits touting the miracles of economic recovery, investors would have to be totally insane to not be snapping up as many stocks as they can get their hands on. But if America’s economy is doing so well, why are billionaires and major investment firms warning of rough waters ahead?

Even Warren Buffet, the Oracle of Omaha, known for his investing acumen and foresight, appears to see the writing on the wall. Having made billions in the fallout of the 2008 crash by taking advantage of lucrative government machinations, Buffet now looks to be positioning himself for a very massive buying opportunity. According to analyst Jeff Nielsen, the head of one of the largest investment companies in the world isn’t invested as heavily into stock markets as you may think. In fact, Nielsen says in his latest interview with SGT Report that Buffet has over $70 billion sitting in cash on the sidelines.

And that can mean only one thing: Buffet knows a crash is coming and he is waiting for perhaps the biggest buying opportunity of his lifetime.

He’s sitting now with over $72 billion in idle capital. He’s 86-years old. He is a long-term value investor, which means by definition that basically all of your money is supposed to be working for you all of the time… and the only time you ever sit with a large amount of dry powder on the sidelines is when you’re expecting a big buying opportunity…

So here is 86-year old Mr. Buffet, who does most of his shopping on the S&P 500, clearly anticipating the biggest buying opportunity in his entire life because he has way more capital sitting aside than at any other time in four decades he has been running Berkshire Hathaway… So, the S&P 500 is sitting in record bubble territory and Warren Buffet is planning on going on a major shopping spree in the near future… what’s going to happen?

Buffet has joined other billionaires in recent months to sit on the sidelines and wait for the crash that everyone knows is coming. And given that these insiders have essentially pulled the majority of their money out of risky markets with many shifting to collapse-proof assets like gold and silver, we must be very close to widespread financial and economic disaster.