Insider Warns: Sophisticated Investors Are Preparing For Global Implosion: “Financial, Social, Geopolitical Turmoil Will Flare Up Like A Tinderbox” 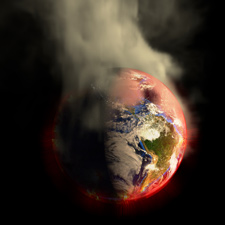 You’d never know it if you only followed mainstream financial pundits, but Russia and China have recently joined forces to bypass the U.S. dollar by establishing their own exchange to facilitate transactions and trade in gold. It seems the whole world, except for Western governments and central banks, understands that we’re facing a crisis unlike anything we’ve ever seen before.

With U.S. financial markets at nearly all-time high valuations, an uncertain interest rate environment and the potential for a serious debt debacle as American politicians set to fight over raising the debt ceiling, Bryan Slusarchuk, President of Kenadyr Mining, warns that there are scores of catalysts that could set the whole tinderbox aflame:

You’ve got a mess in Europe… a really uncertain outlook as to how this Brexit will occur… you’ve got geopolitical turmoil all over the middle east… you’ve got situations like North Korea… there are any number of things… financial, social, political… that can set this tinderbox off.

In the following interview with Crush the Street Slusarchuk explains that while the average investor has thus far sat on the sidelines, major institutional players and sophisticated investors are positioning themselves for widespread uncertainty and the real possibility of a global economic implosion:

While it has been ignored by the Federal Reserve and other Western banks, gold as money, and perhaps in this environment more importantly as a safe haven, has once again become attractive to smart money investors, which are reportedly starting to move heavily into these assets of last resort:

This move in gold in recent weeks has been a very stealth move. The average investor on the street hasn’t been talking about gold. It has crept up quite quietly.

What’s happening out there on a macro level is that you’ve got a lot of turmoil in the world… You’ve got a lot of tension geo-politically… financially… you’ve got monetary and fiscal policy that has run amok and put the world in a precarious financial position… I liken it to a tinderbox… As far as what the catalyst will be for gold’s rise to get really parabolic… it’s unknown, but what I can say, is that the environment is shaken up for a very big run here.

Even the “generalist” investment funds, which have shied away from precious metals and focused their efforts on Silicon unicorns and hype in recent years, are starting to realize that even a small hiccup could be disastrous to their bottom lines:

What these guys are starting to look at as generalists is ‘where can i get a bit of a hedge?’… ‘where can i protect the funds against all of this uncertainty?’

And they’re starting to look at gold…

With the gold investing market minuscule in comparison to other sectors, even small percentage shifts of capital into precious metals by these larger generalist institutions could drive prices to never before seen levels. Because, the moment we see global financial markets or global credit markets buckle like they did in 2008 there are going to be millions of panicked investors around the world fleeing for safety.

And as has been the case throughout history, that financial and economic safety will likely come in the form of hard assets.

Visit Crush The Street for more interviews and commentary like the video you just watch.