In a Blow to Media Gun Narrative, Homicides Down in 2017

Homicide rates had reached a 51-year low in 2014, but have climbed since then.

Nationwide, homicide rates also varied widely by state. The US states with the highest homicide rates in the new report were Louisiana, Missouri, Nevada, Maryland, and Arkansas. The states with the lowest rates were New Hampshire, North Dakota, Maine, Idaho, and Rhode Island. (I have added the most recent data from Canadian provinces for additional context.)

We can see some geographical patterns if we look at the data in map form: 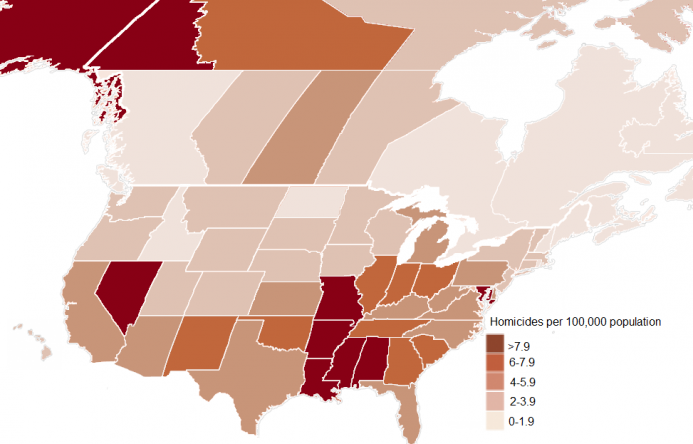 Northern states tend to have much lower homicide rates overall with some of the lowest rates being found in New England, the northern plains, and the Pacific Northwest.

Moreover, as noted in earlier articles on this topic, many of the states with the highest homicide are seeing their rates driven up by homicides in just a handful of cities and neighborhoods — many of which, like Chicago and Baltimore — have very restrictive gun-ownership laws.

Moreover, as total gun sales in the US have increased in recent decades, homicide rates look to continue a long-term decline. According to the New York Times:

Overall crime has been steadily decreasing for the last 30 years in the United States. Inimai Chettiar, director of the Justice Program at the Brennan Center, said the F.B.I.’s statistics — and her organization’s own projections — showed that the rise in crime in 2015-16 was most likely a blip in that trajectory, not the start of a crime wave.

Media pundits, however, have attempted to create a narrative in which there is increasing violence. For example, a current strategy employed by gun-control advocates is to fixate on “school shootings” as evidence of increasing violence, even as homicide rates decreased. However, much of the data used to support this narrative has been flawed. Last month, National Public Radio revealed that many school shooting incidents in a recent federal report had been exaggerated, or were completely false. This was a further blow to attempts to create a new narrative of mounting violence in the face of historical data showing that school violence overall, including school shootings, declined considerably after the mid-1990s.

But, for the sake of argument, let’s say that school violence is increasing in just the past two or three years — even while overall homicides fall. It’s not difficult to see what gun control advocates would fixate on school shooting in attempts to obtain more government restrictions on gun ownership. School shootings are dramatic events that make for good press conferences for politicians who pledge to “do something” for the children.

The fact that the overwhelming majority of homicides are a product of far more “mundane” factors, like gang violence and domestic violence, don’t make for nearly as exciting news events. Thus, the fact that progress is clearly being made on those fronts is ignored while attention is drawn repeatedly to school shootings — which are then themselves reported at higher rates than is actually the case.

Perhaps predictably, politicians have also attempted to take credit when falling homicide rates are acknowledged. As The New York Times reported, Jeff Sessions has attempted to portray the federal government as a key factor in falling rates:

“But our work is not done,” he said. “While we have made progress, violent crime and drug trafficking continue to plague our communities and destroy the lives of innocent, law-abiding Americans.”

In truth, there is no evidence at all that the federal government has had any role in falling homicide rates. If anything, the federal government’s role in violent crime is a negative one as it continues to prosecute the war on drugs, making the illegal drug trade more lucrative and more violent.

Similarly, local police have shown little ability or willingness to confront homicides where they exist. As reported last month by USA Today, police are finding and prosecuting homicide suspects at lower and lower rates:

The national murder clearance rate — the calculation of cases that end with an arrest or identification of a suspect who can’t be apprehended — fell to 59.4 percent in 2016, the lowest since the FBI has tracked the issue.

The data tells a grim story of thousands of murders in which no one is held accountable, Adcock said.

“If we don’t address it, the issue is just going to get worse,” said Adcock, who recently started the Mid-South Cold Case Initiative , a nonprofit that aims to provide assistance to departments looking to bolster their cold case units. “The hole we’re in is just going to get deeper and deeper.”

The issue of murder clearance rates is in the spotlight as Chicago officials struggle to solve gun violence that’s plaguing the city. But the nation’s third-largest city, which only cleared 26 percent of its homicides in 2016, is just one among many big cities struggling to quickly solve gun crimes, according to FBI data and crime experts.

Part of this problem arises from the fact that police departments often prioritize going after petty drug violations and other minor crimes instead of homicides. Concentrating on drug offenses also bring financial rewards to police departments. Moreover, investigating drug cases offers numerous opportunities for making arrests and bringing revenue into the department via asset forfeiture laws. Given how police personnel are rewarded, drug investigations offer police staff more opportunities for professional advancement than does long hours devoted to homicide investigations that may or may not yield many promising leads.

In either case, the fact that the police in many major cities are only making arrests for one-quarter of homicides reminds us why private gun ownership is so important for self-defense.

Ryan McMaken (@ryanmcmaken) is the editor of Mises Wire and The Austrian. Send him your article submissions, but read article guidelines first. Ryan has degrees in economics and political science from the University of Colorado, and was the economist for the Colorado Division of Housing from 2009 to 2014. He is the author of Commie Cowboys: The Bourgeoisie and the Nation-State in the Western Genre.