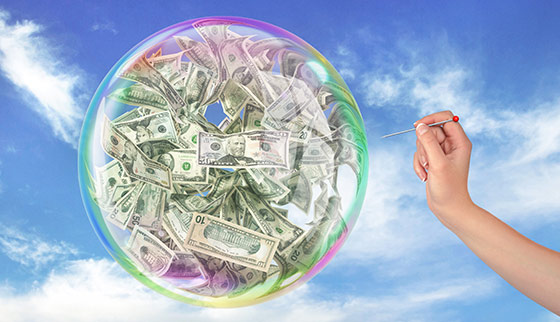 Given that the economy is now totally and completely dependent on inflating asset bubbles, it makes no sense to invest for the long-term.

Beneath the endlessly hyped expansion in gross domestic product (GDP) of the past two decades, the economy has changed dramatically. The American Dream boils down to social and economic mobility, a.k.a. getting ahead through hard work, merit and wise investments in oneself and one’s family.

The opportunities for this mobility in the post World War 2 era broadened as civil rights and equal rights expanded. The 1970s saw a disruption of working-class mobility as high-paying factory jobs disappeared, leaving services jobs that paid less or required more training, i.e. a college degree.

The U.S. economy took off in the 1980s for a number of reasons, including computer technologies, federal stimulus (deficit spending) and financialization (a topic I’ve covered many times). With millions more college graduates entering the workforce and the Internet creating entire new industries, the opportunities to “get ahead” increased across the social and economic spectrum.

But something changed in the aftermath of the dot-com bubble bursting. The fruits of financialization–highly leveraged debt gambled for short-term gains in markets–were extended to everyone with a job (or a willingness to lie) via liar loans, no-document loans and subprime mortgages.

The goal wasn’t homeownership, the purported “official” goal of subprime mortgages: it was short-term speculative gains via “flipping” the house in a few months. Just like the bigshot financiers, the subprime mortgage market enabled marginal borrowers to take control of assets far in excess of their actual capital and sell them to a greater fool for a quick profit far in excess of their earnings.

Wall Street loved this distribution of financialization to the masses because Wall Street made a fortune packaging (securitizing) this toxic debt and selling it to unwary, credulous investors as “low risk” (heh) assets.

After the mortgage-securitization-fraud-housing bubble popped, a secular trend– wages for the bottom 95% of wage earners stagnating–accelerated. “Getting ahead” via earning a college diploma, working hard and counting on merit no longer worked; families with privileges and capital got wealthier, and everyone else found the purchasing power of their earnings declined even as stocks and housing soared.

The only way to “get ahead” in a globalized, financialized economy is either 1) earn at least $200,000 a year from one’s labor or 2) gamble in the inflating bubbles of stocks and housing. In high-cost regions, even $200,000 isn’t enough to get ahead (i.e. buy a crumbling bungalow on a tiny lot for $800,000) if the wage-earner has student loans and/or children; the household needs two earners making top-5% salaries.

The more money the central banks throw at stock-housing asset bubbles, the higher they loft, a process that has pushed housing in high-cost regions out of reach of all those with average jobs and incomes. So much for “getting ahead.”The economy has changed dramatically for the worse: getting a graduate degree no longer guarantees getting ahead (millions of other workers globally have the same credentials); working hard is equally iffy, and traditional investments in one’s family either no longer yields gains (higher education) or they are gambles in the guise of “investments” (housing).

Given that the economy is now totally and completely dependent on inflating asset bubbles, it makes no sense to invest for the long-term: a short-term gambling mentality is required to avoid getting destroyed when the bubble-du-jour pops.

Everyone who believes bubbles never pop, they only expand forever and ever, has never looked at a chart of the S&P 500 (SPX), which illustrates that bubbles always pop, destroying the capital of all who neglected to sell at the top.

If “getting ahead” depends on playing asset bubbles, it’s not getting ahead, it’s gambling.

Charles Hugh Smith has authored several books, including Money and Work Unchained. This book drags the now-popular concept of Universal Basic Income (UBI) from the shadows of Pundit blather into a harsh, illuminating light, and in doing so presents an entirely new view of the future that upends our conventional understanding of work and money. This book lays out a practical pathway that realigns work, money and human fulfillment into a sustainable system that sheds the inequalities and injustices of the status quo in favor of a human-scale way of living.