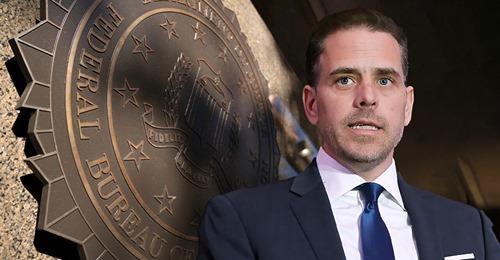 The smartest guy Joe Biden knows, Hunter Biden, acted as a middleman between Ukrainian energy giant Burisma and two Democratic lobbyists currently under investigation for failing to disclose their work for the scandal-plagued company, according to the Washington Free Beacon‘s Chuck Ross.

Biden’s work as a middleman could also explain why federal prosecutors began scrutinizing Blue Star’s work for Burisma. Republicans have scrutinized Biden over his work for the company, one of Ukraine’s largest natural gas producers, as well as with various Chinese companies. Federal prosecutors are also investigating Biden over his tax affairs and foreign business dealings. -Free Beacon

According to Politico, federal prosecutors began investigating whether Blue Star during its probe into Hunter’s taxes and have been looking into whether the company violated foreign agent laws by failing to disclose their work for Burisma – including meeting with US government officials to advocate on behalf of the Ukrainian company whose president.

Putting the pieces together… last December we learned from diplomatic memos that then-Vice President Joe Biden’s office was warned in 2015 that the Ukrainian oligarch who hired his son, Hunter, was deemed corrupt – and that the US Justice Department had gathered evidence to support that conclusion, according to Just The News.

“I assume all have the DoJ background on Zlochevsky,” wrote former US Ambassador Geoffrey Pyatt in Kyiv in a 2015 letter to Biden’s top advisers, referring to Burisma Holdings founder Mykola Zlochevsky.

“The short unclas version (in non-lawyer language) is that US and UK were cooperating on a case to seize his corrupt assets overseas (which had passed through the US),” Pyatt added, noting that the asset forfeiture case against the Ukrainian billionaire “fell apart” when individuals in the Ukrainian prosecutor general’s office “acted to thwart the UK case.”

The memos, released last week by Senate committees investigating Hunter Biden, also reveal that the US Justice Department was involved in the 2014 asset forfeiture brought against Zlochevsky in the UK, right as Hunter Biden was hired to sit on the board of Burisma.

Multiple State officials have attested to the awkward appearance of a conflict of interest posed by Hunter’s position on the board as the United States led efforts to fight corruption in Ukraine. In a September 2015 speech, Pyatt railed against Ukrainian prosecutors for thwarting the UK asset forfeiture case against Zlochevsky.

Pyatt was recently deposed by investigators for the Senate Finance Committee and the Senate Homeland Security and Government Affairs Committee about the Ukraine controversy. Though his staff had reported an alleged Burisma bribe and believed the Bidens’ conduct in Ukraine created an apparent conflict, Pyatt said he never felt compelled to raise such concerns with the vice president.

“So you never gave thought of raising a concern to the Vice President about this board position his son had?” a Senate investigator asked Pyatt during the deposition back in September.

“No,” the ambassador answered. “He’s the Vice President of the United States, and it would have been wildly out of place for me to raise something like that, especially insofar as it had zero impact on the work that I was doing.” –Just The News

What’s more, Hunter’s partner Devon Archer also served on the board of Burisma starting in May 2014 – where the pair was “tasked with finding investment projects for Burisma in the United States and Europe and boosting the company’s reputation.” The two earned over $80,000 per month to serve.

Burisma hired Blue Star in late 2015 to try to kill bribery investigations into Burisma’s owner, Mykola Zlochevsky, a former minister of ecology and natural resources. Zlochevsky was under investigation in the United Kingdom for allegedly paying bribes to secure drilling contracts in Ukraine.

Burisma executive Vadym Pozharskyi emailed Biden and his partners on Nov. 2, 2015, with a list of “deliverables” he hoped Blue Star could provide the Ukrainian company. Pozharskyi said he wanted Blue Star to arrange for U.S. officials to express support for Zlochevsky. He said the “ultimate purpose” of the initiative was to shut down cases against Zlochevsky in Ukraine.

Biden responded on Nov. 5, 2015, telling Pozharskyi that he was confident Painter and Tramontano would deliver on the project and that Burisma should sign a contract with Blue Star. -Free Beacon

Meanwhile, let’s not forget that according to evidence from Hunter Biden’s laptop published by the New York Post, Biden didn’t just know about his son’s business dealings in Ukraine and elsewhere, he participated in them.