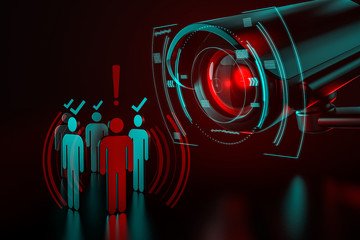 In a truly remarkable and brazen gaslighting of individual rights and freedoms, ABC Finance Limited conducted a survey asking how Brits viewed the idea of social credit scoring.  It’s not clear when this survey was conducted but from the wording, it would appear it was conducted before 2020.

For anyone who has been following the true nature of events over the past few years, it comes as no surprise that financial institutions are ahead of the pack when it comes to an attempt to control people and their behavior through money, even though it is our earnings which these institutions are using as the tool against us.

As our regular readers will be aware, they are using covert forms of a social credit system in their never-ending attempt to shut The Exposé down.

The latest attempt was last weekend. The Exposé’s account was frozen and the donations in the account were “temporarily” blocked.

What “temporarily” practically means is not clear. But not allowing access to one’s own funds is tantamount to theft.

It also demonstrates that the social credit system is already here and ready to be rolled out.

All that is now required is public acceptance, whether that be through indoctrination that this is “for the common good” or creating the illusion it is inevitable and so cannot be stopped.

Neither is true. We must not let these control freaks take control of our lives. We must resist in every way we can.

ABC Finance is a privately owned company established in 2000 and based in Staffordshire, UK. It arranges property finance for commercial and residential property. With less than 10 employees it boasts a focus on a “family business mentality of caring” for its customers. Most would argue that the removal of all rights and freedoms through a Chinese-style social credit score is not a “mentality of caring.” But from the appearance of their survey, ‘Is the UK Ready for a Social Credit System?’, this seems to be what they are promoting.

We’re all familiar with ‘credit scores’, where financial institutions track how responsible you are with your hard-earned money to assign you a value determining the loans and cards you are eligible to apply for.

However, a new scoring system being trialled in China (set to become standard practice by 2020) and currently under consideration in Europe is far less discussed despite the fact it may eventually become an integral part of our day-to-day lives.

“Set to become standard practice by 2020” implies this survey was done before 2020, at a time when even the UK government appeared to value individual rights and freedoms.  How many of us were aware that a Chinese-style social credit system was under consideration in Europe before the implementation of the Covid arm of the Fourth Industrial Revolution?

ABC Finance goes on to tell us what plans were under consideration at that time:

This system monitors a lot more than your financial savviness. It involves governmental and financial institutions ranking your everyday behaviour – both online and via CCTV monitoring – and has been dubbed the “social credit score.”

Essentially, everything from the way you spend your money and behave on social media to the people you associate with would affect your score and whether you are rewarded or punished.

So, ABC Finance surveyed to gauge if the UK was ready for it, not to gauge whether the public agreed with it or not but on the basis that it was a fait accompli.

There is no indication of how many people participated, how the survey was conducted, whether the respondents covered a cross-section of society or where the respondents lived.  Without this basic information, it is not possible to say whether 5 or 500 people participated, if they all worked for ABC Finance or if they previously lived, or still live, in China, for example. We could even speculate that no survey was conducted and that the results were fabricated to promote an ideology. Bearing this in mind, they claimed:

According to their blog, ABC Finance asked a series of questions to determine how respondents would perform if the social credit system was brought into force.  Using China’s definition of “bad behavior” as a benchmark they determined that “at least a quarter of the people we surveyed would be penalized under a social credit system operating under the same principals as the scheme active in China and the one being proposed in Germany.”

“Using these figures as a basic indicator of performance, the average amount of UK residents currently making choices that would land them with a bad social credit score would be 40%,” ABC Finance wrote.

This survey and their article appear to be an attempt to soften up their customers – a nudge – to accept a social credit system as “normal.” We need to become aware of the ethics of a business before we choose to support it. Businesses such as ABC Finance which promote social credit scores and the consequential removal of our freedoms should not benefit from our hard-earned cash.