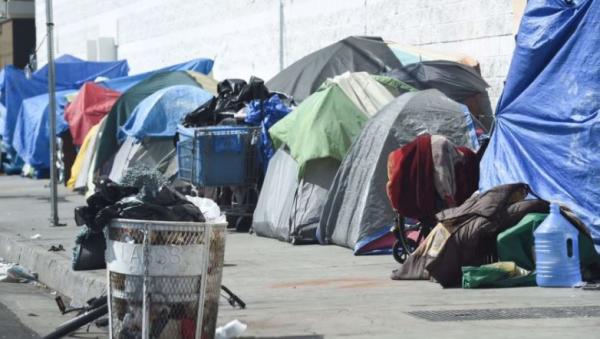 America’s liberal left coast states count themselves among the most adamant supporters of controversial pieces of legislation intended to support low-income families. From their stunningly high income tax rates to their $15 minimum wage mandates, states like California and Washington are leading the charge on implementing Bernie’s socialist agenda.

Of course, some of the biggest advocates of that socialist agenda are the billionaire leaders of Silicon Valley’s largest tech companies…which is precisely why it’s so ironic that it’s the “tech boom” being enjoyed by those billionaires that has resulted in surging housing prices and what SFGate described earlier today as a “homeless explosion pushing West Coast cities to the brink.”

Housing prices are soaring here thanks to the tech industry, but the boom comes with a consequence: A surge in homelessness marked by 400 unauthorized tent camps in parks, under bridges, on freeway medians and along busy sidewalks. The liberal city is trying to figure out what to do.

“I’ve got economically zero unemployment in my city, and I’ve got thousands of homeless people that actually are working and just can’t afford housing,” said Seattle City Councilman Mike O’Brien. “There’s nowhere for these folks to move to.”

That struggle is not Seattle’s alone. A homeless crisis is rocking the entire West Coast, pushing abject poverty into the open like never before.

Nationally, homelessness has been trending down, partly because governments and nonprofit groups have gotten better at moving people into housing. That’s true in many West Coast cities, too, but the flow the other direction is even faster.

“So everybody who was just hanging on because they had cheap rent, they’re losing that … and they wind up outside,” said Margaret King, director of housing programs for the nonprofit DESC in Seattle. “It’s just exploded.”

According to stats gathered by the Associated Press, some 168,000 people in California, Oregon and Washington count themselves among the growing tally of homeless folks who can’t afford housing.

—Official counts taken earlier this year in California, Oregon and Washington show 168,000 homeless people in the three states, according to an AP tally of every jurisdiction in those states that reports homeless numbers to the U.S. Department of Housing and Urban Development. That is 19,000 more than were counted in 2015, although the numbers may not be directly comparable because of factors ranging from the weather to new counting methods.

—During the same period, the number of unsheltered people in the three states climbed 18 percent to 105,000.

—Rising rents are the main culprit. The median one-bedroom apartment in the San Francisco Bay Area is more expensive than it is in the New York City metro area, for instance.

—Since 2015, at least 10 cities or municipal regions in California, Oregon and Washington have declared emergencies due to the rise of homelessness, a designation usually reserved for natural disasters.

Of course, when home prices double in a matter of just a few years and are seemingly just as volatile as a tech stock circa March 2000, you know there’s a problem.

Meanwhile, as we pointed out a few weeks ago (see: San Diego’s Deadly Hepatitis A Outbreak Turns “Statewide Epidemic” As “Outbreak Could Last Years”), the homeless crisis in California has resulted in an alarming hepatitis A outbreak that started in San Diego and is now on the verge of reaching statewide epidemic status as cases have spread through homeless tent cities all the way north to Sacramento.

California’s outbreak of hepatitis A, already the nation’s second largest in the last 20 years, could continue for many months, even years, health officials said Thursday.

At least 569 people have been infected and 17 have died of the virus since November in San Diego, Santa Cruz and Los Angeles counties, where local outbreaks have been declared.

Dr. Monique Foster, a medical epidemiologist with the Division of Viral Hepatitis at the U.S. Centers for Disease Control and Prevention, told reporters Thursday that California’s outbreak could linger even with the right prevention efforts.

“It’s not unusual for them to last quite some time — usually over a year, one to two years,” Foster said.

Of course, as SFGate points out, local governments on the West Coast are responding to the crisis in the best way they know how, namely by raising taxes…

All along the West Coast, local governments are scrambling for answers — and taxpayers are footing the bill.

Voters have approved more than $8 billion in spending since 2015 on affordable housing and other anti-homelessness programs, mostly as tax increases. Los Angeles voters, for example, approved $1.2 billion to build 10,000 units of affordable housing to address a homeless population that’s reached 34,000 people within city limits.

…which should only serve to accelerate the number of businesses relocating to Texas.