Playing basketball as a kid, from the age of six up to the age of eighteen, I had MY FAIR SHARE of last-second thrillers, buzzer-beaters, and game-winning shots.

In one particular game, when I was fifteen, we were down at halftime by seventeen points. The coach told me to be aggressive in the second half if I felt in the zone and good about my shot.

With the GREEN LIGHT from him, my thought was to take shots from the three-point line to close the gap early, instead of chasing it for an entire quarter.

Shooting threes at that age is difficult since the muscles aren’t that well-built to make them under pressure, but I scored the first two I took. My father was in the audience and yelled to me when I was on defense that these 3-pointers were OUT OF CHARACTER for me and that I shouldn’t trust that the streak would go on for long. Instead, he stressed that I should rely on where MY NORMAL GAME excelled – dribbling penetrations and short-range jump shots.

I didn’t listen and missed the next three I took from beyond the arc. 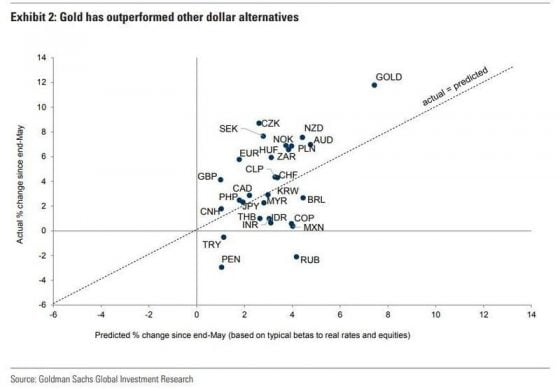 Man, has gold been ON FIRE!

Silver has doubled since mid-March, but these are not their normal returns. They are OUT OF THE ORDINARY, and it’s very easy to be super-bullish right when the markets might want to pause for a few days or weeks.

Precious metals are in a bull market. Buying opportunities in bull markets are created IN DIPS. Don’t be like I was, trying to close a gap with a FULL HALF to go by shooting 3-pointers when the HEALTHIER APPROACH is to stay loyal to your principles.

Obviously, we’ve made a BLOODY FORTUNE; the trick is to BOOK GAINS, once in a while, instead of naively expecting an eternal rally. 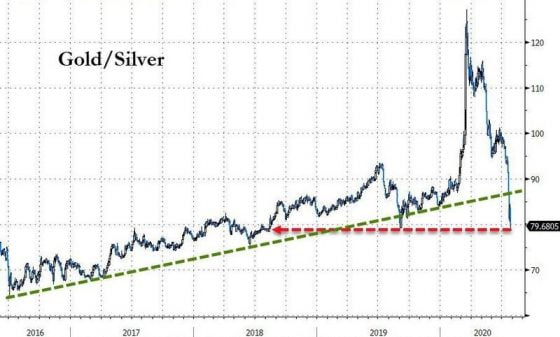 While this chart LOOKS BAD at first glance, it’s actually the most bullish one that we’ve got, since it shows that silver is clearly IN THE LEAD.

Since December 15th, 2015, when both metals bottomed, gold has performed better than silver.

For the cycle to FULLY REVERSE and for silver to announce itself to the world, we must go back to 65:1.

At today’s levels, this implies $30.23/ounce, so BELIEVE ME when I tell you that I’m bullish as well.

At the same time, I’m disciplined.

Since speaking in trillions has become so commonplace, we forget what this means.

Think about that for a second; the Federal Reserve has increased its balance sheet in one month by a few “Googles” and Washington has HANDED OUT the equivalent of an “Amazon” and an “Apple” to the public.

There’s a HUGE PRICE to pay for this type of crazy stimulus package.

Still, even with that, nothing goes up in a straight line; not gold, not silver and not the mining stocks.

Let’s continue to be DISCIPLINED, wise and never become complacent; so many more gains are UP FOR GRABS. If a pullback arrives, USE IT, and if it doesn’t – LET’S GET RICHER TOGETHER!