“Hillary Said So”: Iran Quotes WikiLeaks At U.N. To Prove Saudis Are State Sponsors Of Terror 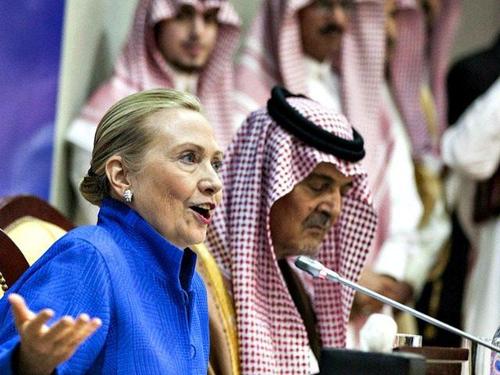 Those rare moments that WikiLeaks gets invoked at the United Nations are always fun, especially when part of a tense feud between Middle East rivals and involving Hillary Clinton.

Iranian Ambassador to the UN Gholamali Khoshroo gave a fiery speech during the final days of the UN General Assembly meeting in New York wherein he responded to specific charges of Saudi Arabia that Iran sponsors terrorism and is waging proxy wars on Riyadh throughout the Middle East, saying that global terrorism actually originates with the Saudis.

The Iranian ambassador supported his case by appealing to a specific WikiLeaks email: “Everybody knows that Saudi Arabia supports terrorism in a very blatant and widespread manner,” he said. In a shock statement before his UN audience, he added, “in the framework of WikiLeaks in 2009, Hillary Clinton is said to have stated that Saudi Arabia is the greatest donor to terrorist groups around the world.”

Interestingly Khoshroo delivered his speech in Arabic, instead of his native Farsi, in order “to make sure that our position is rendered clear” to Riyadh.

He was referencing a 2009 intelligence memo released as part of Clinton’s emails which said that “donors in Saudi Arabia constitute the most significant source of funding to Sunni terrorist groups worldwide” — though she herself was not the author. The memo continued with “Saudi Arabia remains a critical financial support base for Al-Qaida, the Taliban… and other terrorist groups.”

The Iranian diplomat may have also been referencing another Wikileaks file which shows that in a private speech Hillary Clinton made in 2013, she said: “The Saudis and others are shipping large amounts of weapons – and pretty indiscriminately – not at all targeted toward the people that we think would be the more moderate, least likely, to cause problems in the future.”

And further, a 2014 WikiLeaks released Hillary Clinton memo spells it out clearer, saying “We need to use our diplomatic and more traditional intelligence assets to bring pressure on the governments of Qatar and Saudi Arabia, which are providing clandestine financial and logistic support to Isis and other radical groups in the region.”

Ambassador Khoshroo used the WikiLeaks evidence to make the case before the UN assembly that the Saudis back both ISIS and Al-Qaeda, using them as proxy forces to conduct attacks on Iran and religious minorities in the region, such as the recent gunning down of 25 at a military parade in Ahvaz in Iran’s southwest.

His speech also focused heavily on Saudi Arabia’s bloody war in Yemen: “It’s an open secret that the Yemen nation is suffering as a result of the direct machinations and maneuvers of Saudi Arabia,” he added, while holding up photos of Yemeni children who had been killed in an August coalition air strike on a school bus.

Saudi Arabia’s ambassador had previously stated before the assembly that the kingdom “supports the new US strategy to counter Iran, including its seriousness to address the nuclear issue and ballistic missile program and support for terrorism.”

Meanwhile it’s not Saudi Arabia that’s come under pressure for terrorism charges and regional threats of late. On Tuesday France announced it has frozen the funds of a large swathe of Iran’s Intelligence Ministry, specifically its interior security section as well as an associated diplomat.

The French Foreign Ministry’s announcement said that the move was “preventative, targeted and proportionate” and related to counter terror efforts on its own soil.

However, given the lengthy documentation that’s long existed that makes an even greater case proving Saudi state sponsor of terrorism, perhaps such sanctions should also be directed at Riyadh?