Hillary Is Smoking Trump In The Funding War: “She Has A Virtually Unlimited Amount Of Cash” 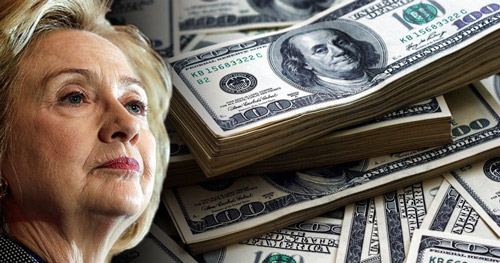 It is literally amazing how an individual so crooked, so duplicitous, and with so many chargeable offenses can actually stay in the running for the presidency of the United States.

Mac Slavo recently penned a piece on the $32-million-dollar donation from the Prince of Bahrain to Hillary Clinton (indirectly), via the Clinton Foundation.  The battle for the presidency is won with the bank account, and Clinton is leaving Trump behind in the starting gates.  Just in the month of July, Clinton raised $90 million for her campaign.

Now her new television ad campaign, coincidentally, is running her a cool $80 million.  She has a virtually unlimited amount of cash to throw into this election, and remember the beauty of it all…anything she takes in at this point, she keeps, whether she wins the election or not, and it’s not taxable income.  She’s operating in the green, and it’s all going to be profit at this point.

There is a list of donors to Hillary Clinton that is circulating on the internet.  Among these (and these are ones that are known, mind you) are such notables as Chelsea Handler, the comedienne, donating $100,000.  There’s nothing funny about that.  Peter Angelos, owner of the Baltimore Orioles, giving Clinton $500,000.  The Tulalip [Indian] Tribe of Washington, $125,000.  The list has individuals, unions, PAC’s…a “smattering” of virtually every demographic.

There’s a Muslim fanatic by the name of Kase Lukman Lawal of Nigeria, an oil billionaire with known operations and ties to known and well-established terrorist individuals and organizations, such as Bosco Ntaganda and Al Shabaab respectively.  This Lawal bundled more than $100,000 for Clinton for her 2008 run.  She returned the favor when she was Secretary of State by blocking any charges of association with known terrorists from reaching him, charges that could have meant 20 years on a conviction.  Ready for the punch-line?

This guy is living in Houston and is a Commissioner for the Port Authority of Houston.

You can read more about it in an article dated July 28, 2016 by IWB entitled HIGH TREASON: Hillary Sells Arms to Qatar, Transfers 20% of US Uranium Production To Russia, Sides With BLM Over Land Grab, Receives TONS of Money from Nigerian Terrorist Billionaire.

You can also read about the $2.35 million given in four donations from a Russian Uranium mining concern to the Clinton Foundation, signed off and shifted by Clinton when she was Secretary of State and headed the State Department.  These donations came between 2009 to 2013.

Trump is a “penny ante” operator in comparison to Clinton.  He backed a deal to keep the Ukrainian administration intact prior to the U.S. Victoria Nuland-led coup, and allowed his campaign manager to get “sucked” into public view, necessitating his resignation.

Clinton?  She practically orchestrated the whole “Arab Spring,” and threw all of Egypt into turmoil, was one of the “jeering” principals involved in killing Kaddafi in Libya, and managed to allow the “removal” of the American ambassador in Libya and his staff…no real questions asked.

If Clinton’s leaked classified e-mails pertaining to the defense and national security of the United States were ignored, then how many e-mails listing her donations from foreigners and foreign entities were swept under the rug?

We haven’t even touched on some of her more well-known “big” backers, such as Soros, Warren Buffet, and (recently announced) CEO of Hewlett-Packard, Meg Whitman.  How much are they donating under the table in addition to what they’re giving that is visible?

Even more: how much of an effect unable to be measured in dollars are their influences having to generate both opportunities and support for her?

The media is firmly in her pocket.  The polls (not much different from polling regarding the removal of horns from cattle) are manipulated and skewed, and all of the printed drivel, the blathering over the airwaves, and the scripted circus of the television stations are all in her corner.  She has the funds to “recreate” herself in the “mom and apple-pie” image…an image that appeals to women, minorities, and liberals…an image they are gobbling up in the manner of the “TV parlor-watchers” of Ray Bradbury’s “Fahrenheit 451.”

She generates more and more money every day, and spends more of it every day.  One thing about the Clintons: they know how to spend money to make more of it.  As the Secretary of State, she sold this country down the river.  Now she’s buying it back, but for her own possession.  The ironic thing is she’s buying it back on the backs of the American taxpayer with her tax-free campaign funds.

Trump may have his Trump Towers and his casinos, but the true tower is the “towering inferno” that Clinton created with her destabilization of the Middle East and the former Soviet republics that she profited from greatly.  And the casino she’s vying for is the United States, where the cards are all marked and the deck is stacked in her favor.  The gamble she’s betting on is whether the American people are dumb enough to make her the “pit boss.”  She’s winning that gamble…by buying their votes long before the ballots are cast.  In the battle of funds, she’s riding into the sunset (of the U.S., that is) and leaving Trump in the dust.  In the end, only the American people lose the whole shooting match.

Fractional Dead Men Voting Multiple Times in Many States: “It’s not who wins the ballots, but those who count the ballots that decides an election”

Operation Choke Point: “Unbridled Abuse Of Executive Power Operating Completely Outside Of The Rule Of Law”