Hidden in Plain Sight: How To Create a Strategic Spider-Hole 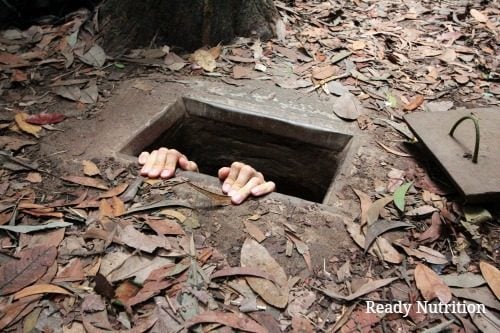 This article was originally published by Jeremiah Johnson at Ready Nutrition.

In a worst-case scenario, give yourself a hidden edge for when the SHTF and the going gets rough.

What we’re going to detail today does not involve any arachnids, but the Spider-Hole takes its name from the creatures. A Spider-Hole is meant to have the characteristics of the home constructed by the Trapdoor spider and other similar species. What does the Trapdoor spider do? He constructs a hole in the ground for himself and lines it with silk. Then the spider builds a “trapdoor” out of silk and debris from ground level to camouflage his portal. Then the spider waits, with the door open a “crack,” looking out with his eight eyes and awaiting movement of his prey.

Then, quick as a snap, he rushes out and jumps on his prey with lightning speed, and drags the now-envenomated prey down into his spider-hole. How’s that for a survival food prep? His technique has been used by man for some time, and we’re going to refresh on it here.

A Spider-Hole should not be used for a long-term hide unless you have no other options. You can prepare them on your property, and utilize them either for a temporary hide site or for a hasty fighting position with which to ambush an enemy. It is not to be used as a proper fighting position for a static defense, as a “foxhole,” as it is not a very defensible position. The spider hole is used to make a quick disappearing act, and also to prep for an ambush.

As we covered “Fabian Tactics” in the post-SHTF combat operations article, I will refresh briefly. Named after the Roman Consul Quintus Fabius Maximus, the Fabian Tactic is also referred to in the vernacular as a “hit-and-run” maneuver. It is especially useful in an ambush meant to slow down or harass a larger unit by a smaller force. Fabian Tactics are perfect for the Spider Hole: hide for a brief time, and when the moment is right, emerge or fire to give the enemy the soup-bone. Then seal up the Spider-Hole and move out of the area quickly and with a purpose.

Optimal places for a Spider-Hole are on the sides of hills with limited access to your rear once the Spider-Hole is in place, with large boulders or rock faces to your rear, and at the edge of a forest just before an open area (field) meets with it. The Spider-Hole should be able to accommodate one person and their rucksack and weapon. The best dimensions should be the length/height equal to 1 ½ the height of a man and twice the man’s girth for the diameter of the hole. The Spider -ole should be on a slight (very slight) grade for the interior chamber so that if the person inside is in the prone, the feet will be slightly lower than the torso.

Such will enable rest within the hole if necessary, and will not be too unnatural a position in which to lie. A Spider-Hole should be as flush with the earth in the entrance as possible, and the “portal” should be made of materials from the local area that do not appear out of place with the immediate site. Do not take those materials from the immediate site! Then there would be gaps/bare places that would be noticeable. The mouth should have some cover (such as a log, sandbags, or rocks), to be located at the entrance to fire a weapon behind, but not preventing you from escaping from the hole.

You will also want to tote in a quart or two-quart plastic bottle to urinate in if you need to be in the hole for an extended period of time.  Ladies: Medical supply warehouses make female “urinals” similar to a urine collecting bottle that are in hospitals. Cost is about $10.  Male or female, when you fill up the bottle, you’ll need to get out and pour it somewhere at a distance to the hole. Don’t allow the urine to turn to methane and then give the position away. If you need to fire your weapon from it? Put those earplugs in first. Triple-flanged earplugs seal off that ear canal and protect those eardrums from the shots. If you’re underground the sound will be amplified by the closed surroundings.

“Niceties” will be a poncho and a poncho liner to be able to wrap up in and insulate you from the ground. A pad would be a good thing.  Remember: you may have to leave it in a heartbeat and come back to it later. One of the primary tools is an entrenching tool (also referred to as an “E-tool,” and I recommend US Army issue with the protective case. The others are cheap pieces of junk. The military’s E-tool is durable and reliable. Your first choice is to use an existing hollow, but remember, it is a hasty position. You can always reinforce it with pressure-treated plywood and boards (to keep it from caving in) if you want to construct it for use on your property later.

You may also want to run out a couple of wireless remote cameras and a screen to monitor movements on trails if you decide to use the spider hole. Good thermal optics and night-vision devices will also be worth their weight in gold. Your family will need to know where each hole is located, and there needs to be a readily-remembered numbering or lettering system to identify the holes. You are once more only limited by your own imagination and creativity regarding these holes.

So, take the tips here and tailor them to your home ground. The Spider-Hole is another preparatory measure you can create to give yourself a hidden edge for when the SHTF and the going gets rough. It has worked well for spiders for millions of years, and it will work for preppers and survivalists, too. Stay in that good fight, camouflage those trapdoors right, and come out when you’re ready to bite!  JJ out!