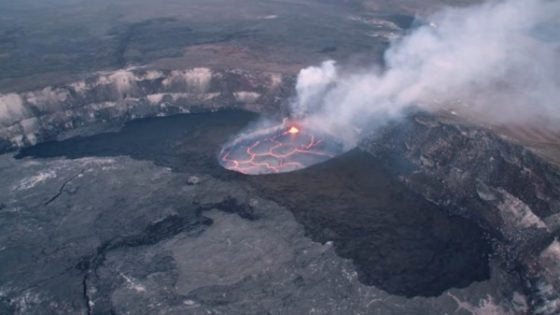 A massive lava lake that formed in the belly of the Kilauea volcano in Hawaii after it erupted in 2018.  This lava lake is now “being monitored” for a possible eruption.

Volcanologist Don Swanson of USGS’ Hawaiian Volcano Observatory said that Kilauea volcano’s next eruption might happen slowly and could make the lake evaporate. The lake’s temperatures run between 176 and 185 degrees Fahrenheit. Swanson says he wants to avoid being called an “alarmist”, but he also needs to warn the public that there is an increasing possibility of an explosive eruption happening in Kilauea, the youngest and most active shield volcano in the southern part of Hawaii also known as the Big Island, according to Science Times.

NASA satellite images have shown that the water levels in the lake have steadily risen ever since its formation in the aftermath of the 2018 eruption. The lake is said to be five times larger than a football field and is about 100 feet deep with a rusty brown color on the surface perhaps due to the chemical reactions in the water.

Scientists have two explanations for why the lava lake’s temperature is so extreme and what makes it keep increasing.

First, they believe that it could be coming from the residual heat in collapsed rubble at the crater’s base heated by the lava column before the volcano erupted in 2018.

The second reason they came up with is that the temperature might have been caused by the neighboring gas vents spewing steam at 302 degrees Fahrenheit. –Science Times

The USGS made sure to say that this does not mean that there will be an eruption, only that they are closely monitoring the changes in the lava lake that could potentially lead to one. Stay alert and pay attention especially if you live on Hawaii’s Big Island. There are definitely some changes going on with the Earth and it’s difficult to say just yet how these will impact humanity.