Gulf Shrimp Tests Show Oil Contamination, But Is It Safe To Eat?

The FDA and local grocery store retailers say that seafood from the gulf is safe to eat. But how sure can we be when the chemical tests being performed on seafood are executed by the very same machine that gives us inaccurate unemployment data, spends $200 million per day on foreign adventures and refuses to open The Federal Reserve’s doors for proper accounting?

A new report from NOLA Emergency Response, a local emergency response group in the gulf, says that two pounds of shrimp which were randomly purchased at a shrimp market in Venice, Louisiana are tainted with oil:

One local activist, â€œMacâ€ Mackenzie of NOLA Emergency Response, decided that it was time to take matters into her own hands. After an incessant 7-week investigation, Mac was able to obtain crucial information from our government regarding the specifics of Gulf shrimp testing. Particularly in the Gulf of Mexico, it is common for shrimp to be prepared and even served whole, with the shell and digestive tract intact. When Mac learned that the Gulf shrimp testing performed to date had not included an analysis of whole shrimp with intact shells or digestive tract, she decided to mobilize. She obtained two pounds of locally caught shrimp from Venice, a small town located in the heart of Southern Louisiana. The samples were promptly transported on ice to a laboratory in Mobile Alabama, where Chemist Dr. Robert Namen tested the digestive tracts of the shrimp for components of crude oil. What they found was an alarming 193 parts per million of â€œOil & Grease.â€

Government testing shows oil contamination as well, but according to NOLA, it’s nothing like the levels seen in the digestive tracts of shrimp.

According to a recent British Petroleum PR piece, gulf seafood is safe and restaurateurs agree – the industry is making a come back:

Perhaps some areas of the Gulf are contaminant free, but we simply don’t know where the shrimp that is being served at restaurants is coming from. Plus, in addition to the oil and grease, what about other contaminants like Corexit, which was used to disperse the oil? There must be traces of that within the seafood as well.

A recent trip to the grocery store indicated that Gulf shrimp was safe to eat. In fact, the local grocery chain had clearly visible signs on the seafood freezers and fresh seafood area that said all of the food had been tested and deemed safe for human consumption.

Living on the Gulf, we were tempted to buy a couple pounds of shrimp and some shark meat, as our seafood reserve supplies of 20 lbs. of shrimp purchased the day after the oil spill had finally run out at the end of summer. ButÂ  a flashback to this picture, recently linked by Rense.com, solidified our decision to stay away from the Gulf and go with some Pacific coast Salmon and Alaskan Halibut catches instead: 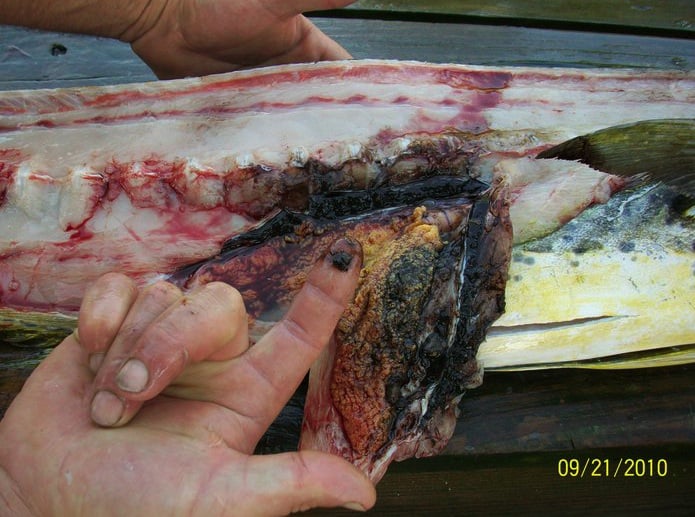 Clearly, there is oil in the seafood, along with who knows how many other contaminants.

As much as we want to believe BP and we want to support the local fishing related industries in the Gulf, until such time that there is no longer a doubt that the seafood in the Gulf is safe to eat, we simply can’t eat the food.

Our economy is in shambles – and those folks living down in the affected regions of the Gulf have it much worse off than we do, but for safety’s sake we cannot consume the food at this time – not until public, private and non-profit organizations have provided enough evidence to support that it’s not only safe for human consumption, but well below allowable toxicity levels.