Grid Down Acapulco: “There’s Nothing to Eat” 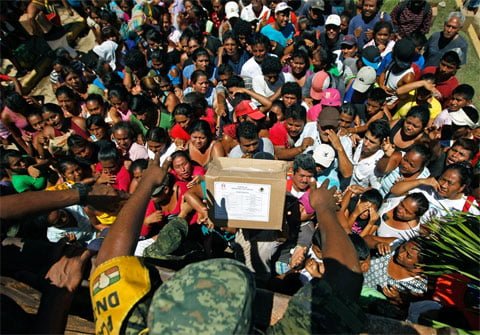 (Pictured: Residents receive food rations handed out by the military in Acapulco, Mexico on Sept. 18. Looting broke out in the flooded Mexican beach resort as the government struggled to reach tens of thousands of people cut off by some of the worst storm damage in decades. Courtesy: Tomas Bravo / Reuters)

Though the government would like us to believe there is rarely looting or panic in the aftermath of a disaster, the fact of the matter is that within 72 hours of any serious crisis people will lose it.

This week flood waters and landslides ravaged the resort town of Acapulco and stranded a reported 40,000 tourists, leaving them without food, water, or any means of escape. Major roadways into and out of Acapulco have been blocked by debris, cutting off recovery efforts for the city’s 680,000 residents.

With the city devoid of law and order, and emergency responders overwhelmed, looters hit the streets in a matter of hours.

You’d think that those who failed to prepare for the possibility of a disaster would be out looking to acquire extra food, fresh drinking water and supplies, but apparently, as we saw in the immediate aftermath of Hurricane Katrina in New Orleans, electronics and other consumer goods were the order of the day:

Back in town, thousands of looters streamed out of the Costco wholesale store in the exclusive Diamante district, wading out of the flooded store with food, televisions and even fridges while soldiers and federal police looked on, AFP correspondents said.

“We can’t stop them. We are in a serious emergency situation,” a soldier said, declining to give his name.

The looters were out in droves looking for TV’s and other high cost goods when they first realized there was no police prescence.

By morning, it became clear that the situation was a bit more widespread then they had anticipated. People quickly realized they didn’t have enough essential goods on their pantry shelves and made their way to local grocery stores, where, as you may have guessed, they were met with thousands of others who had the same idea.

All of them were a day late…

“We are taking food to our children, there’s nothing to eat,” said a woman hauling away grocery bags.

Those who couldn’t find food at local grocery stores turned to their government.

But there were too many hands and not enough food.

As you can see from the number of reached out hands in the photo above, and the number of rations available, the situation was dire for many who never thought to keep reserve foods in their homes.

Time and again we have seen these same events play out after a disaster.

After Hurricane Katrina hundreds died from dehydration and lack of medical supplies.

Within a couple of days of Hurricane Sandy hitting the east coast last year residents were rummaging through trash cans for food.

Yearly power outages during winter months leave tens of thousands without electricity and supplies, and grocery stores are cleaned out within hours ahead of a storm, leaving the majority of people to depend on the few food items they have in their cupboards.

What’s notable about this is that it happens every few months somewhere in the world, and people still don’t take preventative measures to insulate themselves for the next time.

And there is always a next time.

Katrina, Sandy, Acapulco – all of these are small-scale temporary emergency events lasting a few days to a couple weeks. And in all cases the local and federal governments are able to provide support and supplies, albeit usually in a disorganized and limited manner.

Imagine how horrific it will be for the non-prepper in a large-scale disaster that destabilizes an entire region or country for an extended period of time.

It is simply impossible for emergency management agencies to respond to a crisis involving hundreds of thousands or millions of people across several regions or metropolitan areas all at once.

Even FEMA, which recently stockpiled 140 million meals-ready-eat, isn’t prepared. They have said so themselves, and recommend a minimum two week emergency stockpile. Their response will be limited, and more than likely wholly ineffective.

Though it seems like a lot, 140 million meals will go quickly. A disaster affecting just 1% of the U.S. population, for example, would consume that many meals within just two weeks. If 10% of the population were affected, forget about it. We’re talking complete meltdown – looting, theft, robbery, violence, blood in the streets.

We live in a world of perceived security and safety.

As Tess Pennington notes in The Anatomy of a Breakdown, one far-from-equilibrium event and the whole thing falls apart – in 72 hours or less.