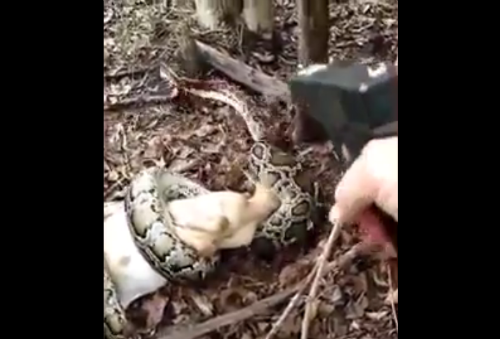 You’ve probably been told your whole life that monsters aren’t real, but you might be hard pressed to believe that sentiment after reading this story.

A Florida resident came upon a grizzly scene on his rural property earlier this month, after one of his pet goats went missing. Scott Dame, who lives in Naples and runs a pest control business, went searching for the animal with his family. It was the second goat that had gone missing on his property over the course of three weeks.

His 10-year-old grandson was the first person to find the goat, which was in the clutches of a massive 12 foot python. Scott then raced over to the snake, and promptly shot it with a pistol. But that wasn’t enough to slay the beast. If you have a strong stomach, check out the footage Scott shot of the encounter with his cell phone.

As it tried to slither away, he shot it several more times until it finally expired. “Although I have dealt with a lot of snakes over the years” he told FOX 13 “I never expected this huge exotic snake in my own yard.”

As you might expect, the goat did not survive. However, Scott expressed gratitude over the fact that the snake was finally dead. “We were all sad about the goats but at least it won’t get any more.”