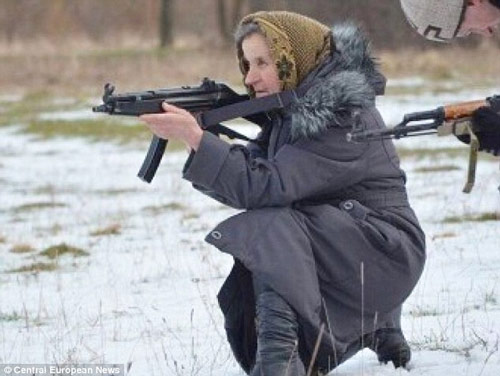 Whether a human interest story or nothing more than propaganda, one has to hand it to 68-year old grandmother Ekaterina Bilyik of Ukraine. After seeing the destruction wrought by Russian separatist forces operating in Eastern Ukraine, Bilyik decided she needed to do her part.

According to the Daily Mail, the mother of three joined up with Ukrainian forces and began training with other cadets in preparation for direct armed conflict in the war-torn region.

A 68-year-old Ukrainian grandmother has been nicknamed ‘The Punisher’ after completing a gruelling military training alongside army cadets four decades her junior.

Footage from the army’s training camp shows pensioner Ekaterina Bilyik rolling over snow-covered fields, leaping to her feet and firing assault rifles alongside the young men in her troop.

She is now preparing to take part in the fierce fighting that has torn eastern Ukraine apart.

She said: ‘I have lived here all my life and we survived the Nazi occupation and the Soviets, and I believe in standing up for what’s right and making sure we never see occupation again.

‘I wanted to set an example, to show young people that no matter how old you are you can make a difference, and that was why I decided to sign up.’

Army spokesman Nataliya Ishenko confirmed that the grandmother had taken part in the same military training as other recruits, who were on average four decades younger than her, and that she had passed all the tests and could use a gun with as much accuracy as the rest.

After completing the training she says she is now ready to go to the front line.

When war comes to your country you’ll have two choices – run or fight. Bilyik has chosen the latter.