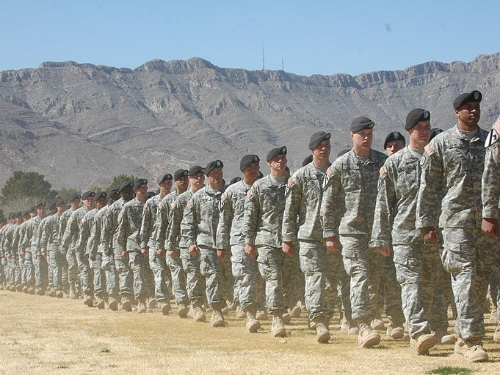 The average person doesn’t realize how close the American empire is to collapsing under its own weight. Hell, the average person’s mind is thoroughly riddled with propaganda and entertainment, that they don’t even realize that their country is an empire. They think it’s normal to live under an all powerful government that has hundreds of military bases all over the world, and is constantly at war.

But there’s no doubt that this state of affairs cannot continue. In fact, even the high ranking officials in our government know that their empire is on the ropes, and challenged on all fronts by nations that are no longer willing to bow down to Washington.

Recently the US Army War College published a report titled, At Our Own Peril: DoD Risk Assessment in a Post-Primacy World. The report, which was written by high level officials from the Pentagon and multiple think tanks, essentially spells out where the American empire is going. In fact, it tacitly admits that the US government is indeed an empire.

The order and its constituent parts, first emerged from the World War II, were transformed to a unipolar system with the collapse of the Soviet Union, and have by-and-large been dominated by the United States and its major Western and Asian allies since. Status quo forces collectively are comfortable with their dominant role in dictating the terms of international security outcome and resist the emergence of rival centers of power and authority.

The report goes on to admit what almost everyone in the alternative media has been saying for over a decade. This empire is rapidly crumbling. But this report goes a step further, by suggesting that the nation state model of governance is falling apart across the board, and not just in America.

In brief, the sta­tus quo that was hatched and nurtured by U.S. strategists after World War II and has for decades been the principal ‘beat’ for DoD is not merely fraying but may, in fact, be collapsing…

…All states and traditional political authority structures are under increasing pressure from endogenous and exogenous forces… The fracturing of the post-Cold War global system is accompanied by the in­ternal fraying in the political, social, and economic fabric of practically all states.

In short, our government knows that its empire is crumbling. It’s collapsing internally, and externally there are a growing number of nations and non-state actors (insurgencies and terrorists) who are challenging America’s global hegemony. However, their solution to this problem is pretty much what you’d expect from an empire. Rather than recognizing the problem, and suggesting that America steers toward a more sustainable course, they’re suggesting more of the same.

Nevertheless, the report involved consultation with key agencies across the DoD and the Armed Forces and encouraged the U.S. government to invest more heavily in surveillance, better propaganda through “strategic manipulation” of public opinion, and a “wider and more flexible” U.S. military. The report states:

“While as a rule, U.S. leaders of both political parties have consistently committed to the maintenance of U.S. military superiority over all potential state rivals, the post-primacy reality demands a wider and more flexible military force that can generate ad­vantage and options across the broadest possible range of military demands. To U.S. political leadership, maintenance of military advantage preserves maximum freedom of action… Finally, it allows U.S. decision-makers the opportunity to dictate or hold significant sway over outcomes in international disputes in the shadow of significant U.S. military capability and the implied promise of unac­ceptable consequences in the event that capability is unleashed.”

So in other words, we can expect more military adventurism, more propaganda, and more loss of privacy. If this report truly represents the typical opinion of the people who run our government, then we can expect things to get a lot worse before they get better. Our empire, like virtually all empires in the past, is not going to be reformed. It’s going to keep making the same mistakes over and over, until it crashes and burns.