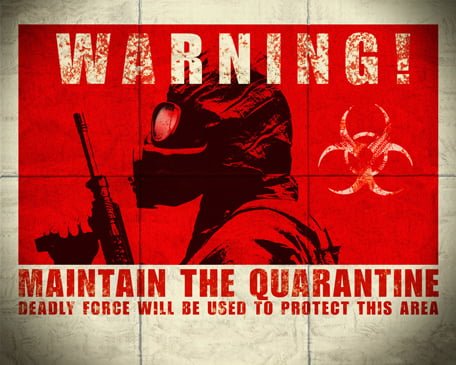 In early 1918 the Spanish flu was nowhere on the radar. A couple years later, by the end of 1920 over 500 million people had been infected and about 100 million were dead – roughly 5% of the world’s population.

The virus spread like wildfire, destroying everyone in its path.

But such things could not happen in our modern society.

Despite breakthroughs in antibiotics, advanced medical facilities, and research teams dedicated specifically to identifying and eliminating any potential pathogens that could befall us, the U.S. government has been planning contingency procedures just in case we have another mutation like we saw at the beginning of the last century.

In fact, with the advent of modern air travel, the spread of a contagion like the Spanish flu could be much deadlier than we could ever imagine.

According to the government, their plans call for a minimum of 2 million dead and 5 million hospitalizations should a viruses such as the H7N9 flu strain or a respiratory coronavirus (MERS-CoV) mutate into a more deadly and contagious form.

According to a recently declassified report from the Department of Defense the threat is real and it could come at any time:

If a flu pandemic strikes, about 30 percent of the U.S. population could fall ill, with 3 million hospitalizations and 2 million deaths. Basic services, such as medical care or essential supply deliveries, will probably be disrupted.

In the plan, the government also says it assumes that a vaccine against a completely new flu strain wouldn’t become available for several months. Even after that, production will ramp up slowly.

Though that level of illness may seem high and the pace of vaccine production slow, it’s completely realistic and based on years of data on flu traits and vaccine production, said Dr. Richard Webby, a flu expert at St. Jude Children’s Research Hospital in Memphis, Tenn.

The estimates above call for a flu pandemic with a mortality rate of approximately 2%. But, as we have seen with pathogen mutations as of late, the mortality rate may be underestimated and could far exceed what the government predicts. The H7N9 airborne virus, first identified in Asia earlier this year, has seen a mortality rate of 20%, leaving researchers examining the virus to conclude that we “should definitely be alarmed and get prepared for the worst-case scenario”

The government’s emergency response plan calls for a multi-pronged approach including medical triage, as well as military superiority in the event of a widespread pandemic that could threaten the stability of the United States.

The potential impact of pandemic influenza (Pl) on military operations is significant.

Throughout a pandemic, United States (US) military forces must remain dominant across the full spectrum of military operations, preserving combat capabilities in order to protect US interests at home and abroad.

The Department of Defense (DOD) Implementation Plan for Pandemic Influenza (DIP) directs DOD to prepare for, detect, respond to and contain the effect of a pandemic on military forces, DOD civilians, DOD contractors, dependents and beneficiaries.

If you have any question as to whether or not martial law is part of the response plan it should now be clear.

Such a disaster would come complete with a total lock-down of infected regions, which would essentially include every major American metropolitan area and thoroughfares into and out of the cities.

That means there would be no travel, no grocery shopping trips, and no going outside; in essence a 24-hour round-the-clock curfew.

Those who fail to follow the rules or have no home to retreat to will likely be interned in Federal Emergency Management Agency refugee camps, much like the small (but ineffective) centers we saw pop up in the aftermath of Hurricane Sandy.

Most people simply don’t believe that such a reality exists. But it does. Right now, somewhere on this planet, a virus is mutating. Perhaps it is on a chicken farm in China, or a pilgrimage in the middle east,  or it may be spreading through a school in your neighborhood.

Viruses and bacteria are evolving. They’re getting stronger, more contagious, and they are becoming resistant to modern medicines.

Should one take hold, despite the preparations being made by the U.S. government and World Health Organization, it will be impossible to contain.

The only course of action is to be able to identify it as it begins to spread, something the mainstream media will likely downplay and cover-up with the latest Hollywood wardrobe malfunction.

They won’t tell the general population until it is too late, so you’ll have to make the decision yourself if you suspect a virus is spreading and has a high rate of infection or mortality. Such information will likely become available first through alternative news, much like it was during the spread of the H1N1 virus in 2009.

If you are lucky enough to catch it up front, keep the kids home from school and avoid work, then that’s a good start.

But you’ll also need an effective personal pandemic preparedness plan and supplies to weather the storm once the country goes into martial law lock-down.

The government is making preparations. Are you doing the same? Or will you depend on their ability to organize an effective response for 300 million panicked Americans?