Gov Emergency Manager: “Ebola Outbreak is Being Conducted On Purpose; Violates All Protocols” 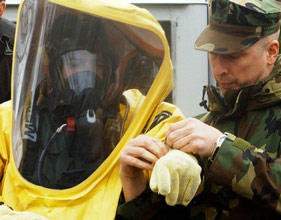 To say that the handling of the Ebola crisis from the get-go is a disaster would be an understatement. For months, as the virus took hold in town-after-town, country-after-country in West Africa medical professionals and emergency services experts warned that unless drastic containment measures were implemented it would eventually make it’s way to Europe, the United States and the rest of the world.

It is now clear that all containment efforts, if we can call them that, have failed to prevent the spread of the virus.

In the United States, where tens of billions of dollars have been spent on national security, one can’t help but notice the complete lack of discipline and failure to follow containment protocols once the infection was identified in Dallas. Among the evidence for how poorly the situation has been handled are haphazard quarantine guidelines, unbelievably unsanitary cleanup procedures, failure to isolate the ambulance that was used to transport the victim, and a total breakdown during hospital intake.

The situation begs the question: Are top-tier officials at the CDC and at the White House incompetent, or are they letting this happen on purpose?

One insider with intimate knowledge of the inner workings of Federal Emergency Management Agency (FEMA) response protocols thinks the latter. In an interview with Alex Jones’ Infowars the anonymous whistleblower says that the procedures for dealing with an outbreak like smallpox and Ebola are very clear cut, and none of them were implemented in Dallas.

First, he says, the National Guard would be deployed to lock-down all entry and exit points into the affected area. Then, law enforcement would redirect people to hospitals, churches and other government agencies for care and/or screening. Finally, those identified or suspected of being infected would be isolated in containment centers at military bases or FEMA facilities.

Considering that the response to Patient Zero in Dallas lacked even the most basic response for pandemic prevention, the notion that this is an engineered event is becoming all the more likely.

The reason I know the Ebola outbreak is being conducted on purpose is it violates all protocols.

There are many competent people in the CDC, the military and emergency management offices that need to blow the whistle.

They’re being told to stand down from the top.

If this is by design, then what is the end game?

It’s been suggested by numerous sources that this is a dangerous false flag event. The government has not only failed to contain the virus, but they have given the American people no guidance on how to avoid contracting the disease:

I have come to an undeniable conclusion, that in the fact of this coming pandemic, I cannot trust my government to make wise and prudent decisions on my behalf.  I am on my own when it comes to the present crisis. I can trust nothing that this government says. We are all on our own.

In about two weeks will find out if Dallas Patient Zero spread the virus to others and it’s quite possible that even cases unrelated to that one will start showing up in other parts of the country. Moreover, many researchers warn that the virus is mutating as it touches more people, leading to the very real possibility that it could go airborne like a common flu virus. If that happens we could be talking about a situation that makes the 1918 Pandemic look like a summer cold.

A contagion map produced by researchers at M.I.T. and the New England Complex Systems Institute shows just how far the ‘spread’ of Ebola could be in its current form – now try to imagine how fast this happens should the virus become capable of transmitting itself like the flu.

And if this truly goes “viral,” then we may well see a government lock-down of the sort described by the government insider. But that lock-down won’t be on the level of a small town or city, but our entire nation.

Perhaps this is the ultimate goal of this crisis and why protocols have been ignored in Dallas.

Are you prepared to trust your life to the government going forward? Or have you taken steps to prepare just in case Ebola spirals out of control?

Everything You Want to Know About Ebola

The Pantry Primer Food Supply For an Emergency