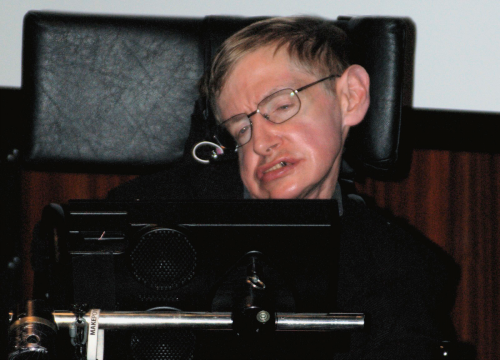 Proponents of man-made global warming have a habit of making frightening predictions that never come true. Every ten years or so, they tells us that within a decade the human race will have destroyed the planet with our carbon emitting vehicles and power plants. They say the same thing every time. The seas will rise several feet, atmospheric temperatures will skyrocket, ecosystems will be obliterated, and human civilization will collapse. And after ten years passes by without incident, they shamelessly make their next prediction.

The latest prediction is perhaps the most outlandish, and it comes from a source that you might not expect.

“We are close to the tipping point where global warming becomes irreversible,” he said yesterday (July 2) in an interview with BBC News. “Trump’s action could push the Earth over the brink, to become like Venus, with a temperature of two hundred and fifty degrees, and raining sulphuric acid.”

Hawking, who directs research at the Centre for Theoretical Cosmology at the University of Cambridge, UK, said climate change is one of the great dangers we face, and rebuked Trump for obfuscating its existence and withdrawing the US from the Paris Accords.

“By denying the evidence for climate change, and pulling out of the Paris Climate Agreement, Donald Trump will cause avoidable environmental damage to our beautiful planet, endangering the natural world, for us and our children,” he said.

That is perhaps the most outlandish global warming prediction that has ever been made by any scientist. How such an otherwise intelligent man could say that is mind boggling.

For starters, there isn’t any evidence that the Paris Agreement would actually have a significant effect on the climate. But that’s a forgivable mistake. There are plenty of highly educated people who take that accord seriously, despite the evidence that suggests it’s at best useless, and at worse it could decimate the American economy. But at least there’s an argument to be made on both sides.

What’s absolutely unforgivable, is Hawking’s claim that humans could damage the earth’s atmosphere so much through carbon emissions, that it would resemble the lifeless atmosphere of Venus. To give you an idea of how asinine that idea is, the current level of Co2 in the atmosphere is over 400 ppm. 250 million years ago, when dinosaurs roamed the earth and life on this planet was likely just as abundant and diverse as it is now, that level was 5 times higher. 250 million years before that, it was at 7,000 ppm, and the average temperature at that time wasn’t over a hundred degrees hotter. It wasn’t even close to what we see on Venus.

It’s probably not even possible for human’s to put that much Co2 in the atmosphere. The most liberal estimates suggest that the atmosphere would contain Co2 at a level of 5,000 ppm if we burned through every fossil fuel source on the planet, and that’s not likely. But again, even if we did that, our planet would not resemble the surface of Venus.

There’s only two reasonable explanations for this bizarre prediction. Either Hawking’s brilliant mind is going senile, or he’s pushing alarmist claims in the hopes that it will scare us all into supporting climate change initiatives that he thinks will save our planet. Whatever the case may be, this man’s commentary outside of physics shouldn’t ever be taken seriously.