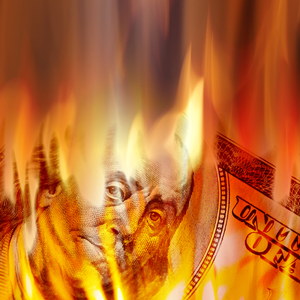 This article was originally published at SGTReport.com.

Editor’s Note: The demise of the dollar on the world stage has been prepared behind the scenes for sometime now, and floated in the media for several years. It has been happening in the relatively slow stages of years, and in the larger picture, decades via the emerging new world order.

The irony might be that the dollar is considered “strong” right now – at the expense of export trade and international debt repayment while Americans are getting shafted and left behind altogether. China’s blatant moves towards becoming part of the global reserve currency are now becoming undeniable and increasingly, China’s place is being accepted by the institutions of note across the world.

What is relatively new to the picture here is the extent to which Western finance is getting shut out, to the detriment of average Americans in every strata of society. Pay attention to the end of this brief article – the people are put on notice to get ready for survival… physical, mental, economic, etc. The time of SHTF may well be approaching. Are you ready?

PROOF: The World Is ACTIVELY PREPARING To DITCH THE DOLLAR — Bill Holter

There is now mounting evidence and undeniable proof that the world is actively preparing for economic life after the death of the Dollar. The facts are now quantifiable, and for those if us who are accustomed to this moment is history where the Dollar is still technically “the world’s reserve currency” and cheap imports fill big box stores, the truth of what’s occurring globally RIGHT NOW as discussed in this interview with Miles Franklin’s Bill Holter is startling – if not downright frightening.

Bill’s recent article TRIGGERS shows how the pieces of the anti-Dollar puzzle are rapidly falling into place: The AIIB is only one piece of the De-Dollarization puzzle, another is the new clearing system set to directly compete with SWIFT. While other important puzzle pieces include the BRICS bank, and the Shanghai PHYSICAL metals exchange which is set to go live very soon, potentially breaking the back of the Comex, the LBMA and the fiat Ponzi which to this point, has protected the Dollar by keeping precious metals prices artificially low through massive paper manipulation.

Bill Holter says, “I believe that the world has for the last at least two years, has been preparing themselves to move away from the dollar. But also, they’ve been isolating the U.S., isolating the West, because they KNOW a collapse is coming. And if they can isolate the Western financial system, with them outside the system as much as can be, then they can mitigate the damage to themselves.”

Collapse of our current financial system is clearly coming. The question is, how bad will it get for those of us trapped in the United States, trapped holding only Dollars? Holter says,

“My hope is that is doesn’t get this bad, but my suspicion is that it will get worse, where you have no access to ATM’s, credit is completely shut off, we may have power, water, electricity supply problems.

What I’m going to tell you is, if you know how to, or can learn how to live like Davey Crocket or Daniel Boone, we may go through a period of time where that’s the case. I hope I’m wrong, I fear that I’m right.”