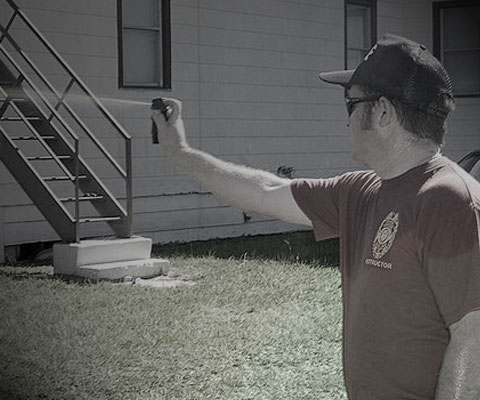 Things are getting frightening in Europe.

Through a wildly arranged deal to take in a flood of refugee migrants from Syria, the Europeans are taking a bite of blowback, merely from being accomplices in the chain reaction of wars ranging from Iraq, to Libya, Syria and beyond. While the U.S. continues to sponsor terrorism to oust Assad, hundreds of thousands are being displaced. Now the EU is being confronted with the culture of Islam, and all the fears and controversies that go with it.

With heightened fears about unruly and dangerous individuals, including possible terrorists cells among them, many residents are taking arms and preparing to defend themselves, in case the worst should happen.

Not long after Austria made news for a buying spree on long guns in response to recent tensions, there is also a reported run on pepper spray in Deutschland as “frightened Germans buy protection against refugees.”

Despite occasional videos of angry Germans protesting at what has become the biggest “foreign invasion” of Europe since World War II, the German popular response to the wave of migrants, which is now expected to top 1 million in 2015 has been relatively calm. Fear (and anger), however, are building beneath the otherwise calm surface.

According to a report by Focus, following a 600% surge in sales over the past two months, Germany has run out of pepper spray, and the irritating substance can now only be purchased after weeks of waiting. Focus says that according to pepper spray manufacturers, “frightened Germans” have bought out all the available inventory. The alleged reason, according to the German publication: “die Flüchtlingskrise“, or the refugee crisis.

“There is fear” explains Kai Prase, managing director of DEF-TEC Defense Technology GmbH in Frankfurt, one of the major producers of repellents. “For the past six to seven weeks we have been practically sold out.” […] The waiting period has already reached about five weeks.

People have been spending money on personal protection, and in certain countries, many are regretting restrictions on their rights to purchase and own firearms for their homes:

Despite how hard it is to attain these weapons in countries like Austria, firearms are currently being sold there in record numbers … [a] trend fueled by the refugee crisis. According to a Czech TV report, pretty much all of the long guns in the country have been sold out for the past three weeks. One gun merchant revealed that most of the buyers are women who want to protect themselves, and those who can’t buy firearms are buying up pepper spray.

“All over Europe people now want the means to defend themselves. Self-defense is no longer a dirty word. In countries like Austria, where it is still legal to own a firearm, gun sales are at record levels.”

There have been many reports about rape incidents tied to these groups, and deep concerns about violence and confrontation. Many more are concerned over the cultural invasion that represents a destruction of traditional norms.  Sharia law has been in the crosshairs because Muslim enclaves in Europe have been particularly reluctant to assimilate with the locals, many of whom see the trend as a threat. However, political correctness has limited official criticisms of these incidents.

A woman traveling from Budapest to Vienna, who happened to be fluent in Arabic, overheard a group males discussing raping the women who weren’t “properly dressed”:

Sweden has become recognized as the “rape capital of the West” as a spike in the number of reported rapes has coincided with an influx of clashing migrants. A politician in the Swedish Democrat Party said:

“When will you journalists realize that it is deeply rooted in Islam’s culture to rape and brutalize women who refuse to comply with Islamic teachings. There is a strong connection between rapes in Sweden and the number of immigrants from MENA-countries [Middle East and North Africa].”

One angry Swede sounded off on the “swarm” of cultural disintegration:

Firearms and pepper spray are only among the most popular self-defense tactics that can be used in a crisis. If they are unavailable, either due to political restrictions, or due to supply, nearly anything can work as an alternative to stop an attacker:

Get Loud and Fight Back – When an unknown person rushes towards you as if to attack, shouting “Back off!” and move towards that attacker, not away. The person attacking might not be suspecting you to fight back so this could give you time to attack first. It might also surprise the attacker and alert others that you are in need of help.

Use Anything Can Be Used as a Weapon – Just like in any survival situation, you can use anything you have on you, a purse, keys, hairspray, dirt, etc., to ward off an attacker. The absence of a gun, knife, or pepper spray does not mean you are without assistance. Anything in the immediate environment could be used as a weapon, and it might be helpful to briefly survey what is around you where you go in case of an attack.

Know the Major Weak Points of the Body – If you have to fight off your attacker, you may only have a small window to deliver a crippling blow, one that allows you to get away. Consequently, aim for the areas of the body that are most easily injured which are the eyes, ears, nose, neck, knees, and groin. The elbows, knees, and head are the most effective body parts for inflicting damage.

The Prepper’s Blueprint discusses many of these strategies and other ways to lie low when unruly crowds are in the area.