Germany Confiscating Homes to Use for Migrants: “A Massive Attack On Property Rights” 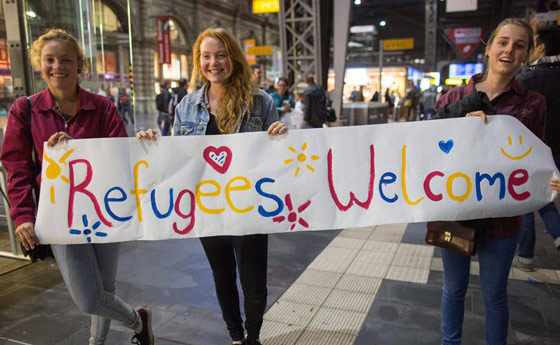 The following report was originally published by Soeren Kern of the Gatestone Institute at: https://www.gatestoneinstitute.org/10352/germany-migrants-property-rights

Authorities in Hamburg, the second-largest city in Germany, have begun confiscating private dwellings to ease a housing shortage.

Authorities in Hamburg, the second-largest city in Germany, have begun confiscating private dwellings to ease a housing shortage — one that has been acutely exacerbated by Chancellor Angela Merkel’s decision to allow more than two million migrants into the country in recent years.

City officials have been seizing commercial properties and converting them into migrant shelters since late 2015, when Merkel opened German borders to hundreds of thousands of migrants from Africa, Asia and the Middle East. Now, however, the city is expropriating residential property units owned by private citizens.

In an unprecedented move, Hamburg authorities recently confiscated six residential units in the Hamm district near the city center.The units, which are owned by a private landlord, are in need of repair and have been vacant since 2012. A trustee appointed by the city is now renovating the properties and will rent them — against the will of the owner — to tenants chosen by the city. District spokeswoman Sorina Weiland said that all renovation costs will be billed to the owner of the properties.

The expropriation is authorized by the Hamburg Housing Protection Act (Hamburger Wohnraumschutzgesetz), a 1982 law that was updatedby the city’s Socialist government in May 2013 to enable the city to seize any residential property unit that has been vacant for more than four months.

The forced lease, the first of its kind in Germany, is said to be aimed at pressuring the owners of other vacant residences in the city to make them available for rent. Of the 700,000 rental units in Hamburg, somewhere between 1,000 and 5,000 (less than one percent) are believed to be vacant, according an estimate by the Hamburg Senate.

Socialists and Greens in Hamburg recently established a “hotline” where local residents can report vacant properties. Activists have also created a website — Leerstandsmelder (Vacancy Detector) — to identify unoccupied real estate in Hamburg and other German cities.

It remains unclear why the landlord in Hamm left his apartments vacant for more than five years. Some have posited that, given the location of the properties, the renovation costs may have been too high and probably would not have been offset by the rental income.

Others are blaming city officials for not approving more building permits to allow for the construction of new residential units. A study conducted in 2012 — well before the migrant crisis reached epic proportions — forecast that by 2017, Hamburg would have a deficit of at least 50,000 rental properties.

In 2016, however, only 2,433 new residential units came onto the market, while only 2,290 new building permits were approved, accordingto statistics provided by the City of Hamburg. These numbers were up slightly from 2,192 new units and 2,041 new permit approvals in 2015.

In 2012, Hamburg’s Socialist government presented a plan to build 6,000 new residential units per year. The plan never materialized, however, because prospective builders were constricted by government-imposed rental caps which would have made it impossible for them to even recover their construction costs.

Since then, the city has turned to seizing private property to resolve its self-inflicted housing crisis.

On October 1, 2015, the Hamburg Parliament (Hamburgische Bürgerschaft) approved a new law that allows the city to seize vacant commercial real estate (office buildings and land) and use it to house migrants.

City officials said the measure was necessary because, at the time, more than 400 new migrants were arriving in Hamburg each day and all the existing refugee shelters were full. They said that because the owners of vacant real estate refused to make their property available to the city on a voluntary basis, the city should be given the right to take it by force.

The measure was applauded by those on the left of the political spectrum. “We are doing everything we can to ensure that the refugees are not homeless during the coming winter,” said Senator Till Steffen of the Green Party. “For this reason, we need to use vacant commercial properties.”

Others have argued that efforts by the state to seize private property are autocratic and reek of Communism. “The proposed confiscation of private land and buildings is a massive attack on the property rights of the citizens of Hamburg,” said André Trepoll of the center-right Christian Democratic Union (CDU). “It amounts to an expropriation by the state.” He said the proposed measure is a “law of intimidation” that amounts to a “political dam-break with far-reaching implications.” He added: “The ends do not justify any and all means.”

Katja Suding, the leader of the Free Democrats (FDP) in Hamburg, said that the proposed law is an “unacceptable crossing of red lines… Such coercive measures will only fuel resentment against refugees.”

Similar expropriation measures have been proposed in Berlin, the German capital, but abandoned because they were deemed unconstitutional.

In November 2015, lawmakers in Berlin considered emergency legislation that would have allowed local authorities to seize private residences to accommodate asylum seekers. The proposal would have authorized police forcibly to enter private homes and apartments without a warrant to determine their suitability as housing for refugees and migrants.

The legislation, proposed by Berlin Mayor Michael Müller of the center-left Social Democrats (SPD), would have amended Section 36 of Berlin’s Public Order and Safety Law (Allgemeine Gesetz zum Schutz der öffentlichen Sicherheit und Ordnung, ASOG), which currently allows police to enter private residences only in extreme instances, to “avert acute threats,” that is, to fight serious crime. Müller wanted to expand the scope for warrantless inspections to include “preventing homelessness.”

The proposal was kept secret from the public until the leader of the Free Democrats (FDP) in Berlin, Sebastian Czaja, warned the measure would violate the German constitution. He said:

“The plans of the Berlin Senate to requisition residential and commercial property without the consent of the owner to accommodate refugees is an open breach of the constitution. The attempt by the Senate to undermine the constitutional right to property and the inviolability of the home must be resolutely opposed.”

Since then, both the mayor’s office and the Senate appear to have abandoned their plans.

Following an investigation, Gunnar Schupelius, a columnist with the Berlin newspaper BZ, wrote:

“A strange report made the rounds at the weekend: The Senate would authorize the police to enter private homes to house refugees, even against the will of the owner. I thought it was only satire, then a misunderstanding, because the Basic Law, Article 13, states: ‘The home is inviolable.’
“So I went on a search for the source of this strange report and found it. There is a ‘proposal’ which the Senate Chancellery (Senatskanzlei) has apparently circulated among the senators. The Senate Chancellery is another name for the mayor’s office. The permanent secretary is Björn Böhning (SPD)…

“The proposal is clear: The police can enter private property without a court order in order to search for housing for refugees when these are threatened with homelessness. You can do that ‘without the consent of the owner.’ And not only should the police be allowed to do this, but also the regulatory agencies.

“This delicate ‘proposal’ attracted little public attention. Only Berlin FDP General Secretary Sebastian Czaja spoke up and warned of an ‘open preparation for breach of the constitution.’ Internally, there should have been protests. The ‘proposal’ suddenly disappeared from the table. Is it completely gone or will it return?”

It remains unclear why no one has challenged the constitutionality of Hamburg’s expropriation law.

Meanwhile, some Germans are asking what is next: Will authorities now limit the maximum amount of living space per person, and force those with large apartments to share them with strangers?