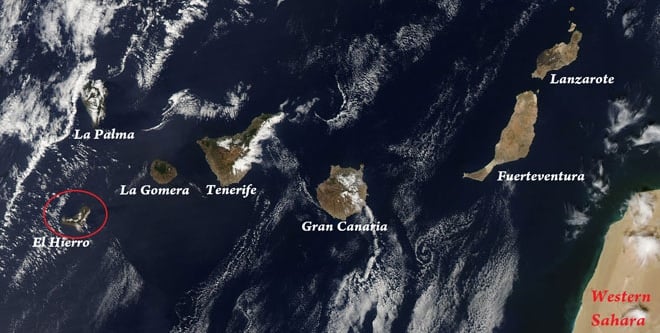 The IGN, Spain’s USGS equivalent, has issued a Red Alert warning for the El Hierro volcanic region in the Canary Islands amid thousands of earthquake swarms and volcanic activity which started in early August:

SPAIN’S Instituto Geográfico Nacional (IGN) confirmed on Tuesday that an underwater eruption has occurred five kilometres off the southern coastline of El Hierro, the smallest of the Canary Islands.

A Red Alert has since been issued by local authorities for the town.

A notice posted on the Emergencia El Hierro website on Tuesday evening stated: “Phase pre-eruptive. It involves the initiation of a preventive evacuation. Make yourself available to the authorities.”

For those not familiar with the volcano, it is situated off the northwest coast of Africa in the Canary Islands, an autonomous Spanish archipelago. While there is no danger to the United States from volcanic eruptions, it has been long theorized by researchers that a large enough eruption and earthquake may be capable of splitting a neighboring volcano, La Palma, in two, which would subsequently cause a land slide on a scale unprecedented in recorded human history. The result would be a massive Mega-Tsunami that would cross the Atlantic ocean, slamming into the Eastern cost of the United States, the Caribbean islands and parts of South America.

While Tsunamis on this scale are incredibly rare according to researchers, a landslide in 1958 in Latuya Bay, Alaska caused a Mega Tsunami (video) whose wave was higher than the Empire State Building and washed over trees and land some 1,700 feet high above sea level.

The theorized landslide in the Canary Islands would involve rock masses that far exceed the Alaskan landslides, estimated to be 10,000 times as much mass, suggesting that the resulting Tsunami would easily exceed three thousand feet (30 times bigger than the the 2004 Indian ocean Tsunami) and travel at roughly 450 – 500 miles per hour. The wave would slam into the Eastern seaboard with extreme force threatening over 200 million people who live in states from Florida to Maine, the north eastern Canadian coast, the Caribbeans, Brazil and Venezuela.

Simon Day, of the College University of London, says the La Palma volcano, situated in the earthquake zone and less than 100 miles from Hierro, is a geological time bomb:

What we envisage is the whole of this coast line [approximately 1/6 the entire mass of the island] and the slope extending up, all the way to the crest of this volcano that is now in the clouds… will slide away in a single massive landslide into the ocean, pushing the water up in front of it to create the Tsunami wave.

An previous earthquake (1949) in the Canaries caused the La Palma volcano to actually split nearly in half, prompting scientists to begin warning of the real possibility that massive earthquakes and volcanic activity could be devastating to residents of not only the Canary Islands, but North and South America, as well.

Given that the entire region is under earthquake warnings and parts of the Canary Islands are now being evacuated, with a red alert having been issued in the Hierro area, we find it necessary to, at the very least, inform our East Coast readers of the possible threat should a massive earthquake in the region cause a breaking away of parts of the island(s).

The USGS is apparently refusing to issue news, alerts or warnings to East Coast residence regarding the progressively deteriorating circumstances surrounding the El Hierro volcano in the Canary Islands, and a search of the USGS web site resulted in no information, news, alerts or warnings for how these events may affect the United States. Primary news channels remain silent on any possible threats as well. Modern Survival Blog’s research indicates the activity is so significant that the Canary Islands have been sinking since July of this year and we are now receiving reports of widespread volcanic flows in the ocean:

A look at the GPS stations there, reveals quite evidently that most of them (6 of 10) in the area are literally sinking, and have been doing so since about July of this year. My own observations of other volcanic regions have shown that there is often ‘inflation’ or rising of the land mass prior to volcanic eruption. In this case though, there is rather dramatic deflation to the northeast of El Hierro, particularly ‘Canarias’. The region is sinking…

In stark contrast though at El Hierro, today, from VolcanoLive.com (John Seach), “An undersea eruption began off the coast of El Hierro Island, Canary Islands on 10th October 2011. Initial reports have placed the eruption site a few kilometres off the south coast of the island at a depth of about 450 m. The eruption has only been confirmed from seismic activity.”

It is our intention to keep the public aware of the possibility of large-scale natural disasters, and the events taking place in the Canary Islands certainly qualify. As the information above suggests, such events are rare, yet extremely destructive if they come to pass.

At this time we advise those on the East Coast to remain aware of the earthquake swarms off the coast of Northwest Africa. In the event a massive enough quake occurs, dislodging parts of the La Palma volcano, you’ll have approximately seven (7) hours to evacuate the east coast of the United States and make your way inland before the first wave hits.