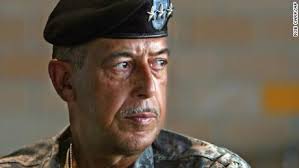 A United States military general, who was appointed by the ruling class, is recommending “quick reaction troop” in Washinton D.C. to protect against the slave uprising.  It sure appears that the powers that believe they own everyone are starting to worry that people no longer need them and are no longer willing to be slaves.

The retired Army general appointed by House Speaker Nancy Pelosi to lead a security study after the January 6 Capitol riot has called for setting up a quick-reaction force to permanently stand ready for threats against the government, according to a report from RT. Meaning any uprising from the “governed” or “the controlled” or the slave lass will not be tolerated by the masters.

Now, are we beginning to understand that government is slavery? It literally doesn’t matter if it’s a republic or a democracy or a socialist dictatorship. None of us should ever be owned by anyone else. The government knows it, and enough of the public must be figuring it out if retired US Army Lt. General Russel Honore says those who desire their freedom are the problem to be dealt with.

The strategy would permanently militarize the nation’s capital with an active-duty force dedicated full-time to responding to security emergencies in Washington’s government district. Honore, who previously said that US Capitol Police (USCP) may have been “complicit” in the riot, also called for hiring more than 1,100 additional officers for the department, including filling 233 open positions.

Many of the new hires would be intelligence analysts who would monitor security threats against the Capitol. Honore also wants the USCP to create a force of horse-mounted officers to help control crowds, as well as expanding its unit of bomb-sniffing dogs. Other recommendations include speeding the decision-making process for deploying the national guard; beefing up security-monitoring systems; requiring background checks of Capitol identification holders to reduce “insider threats”; establishing more screening portals to access the complex; and creating dedicated riot platoons who can be called on whenever Congress is in session. Members of Congress also would be given beefed-up security for travel, their home offices and their residences. -RT

Honore is best known for his role in leading the National Guard response in New Orleans after the city was devastated by Hurricane Katrina in 2005. His troops were involved in confiscating guns (stealing property) from residents after New Orleans Police Chief Eddie Compass III declared that only law enforcement officers would be allowed to have firearms amid the violent, post-storm chaos in the city.

Wake up if you haven’t yet. If anyone says they have a higher claim over your life and property than you do if any says they have the right to “make laws” that you are forced to obey or they can physically harm you or steal your property, you are a slave. We all are slaves. The ruling class is fortifying their defenses against us, which means enough of us have figured it out. The next step is massive peaceful disobedience of the government, the protection of each other against them.